In October 2013 we decide to have a trip to Indochina.

The main route is planned for Vietnam but we definitely also want to visit Cambodia.

We fly to Siem Reap, the capital city of Siem Reap province, 300 km from Phnom Penh in the northern part of Cambodia, located at the Siem Reap river at the Tonle Sap lake with a population of about 200.000 people. 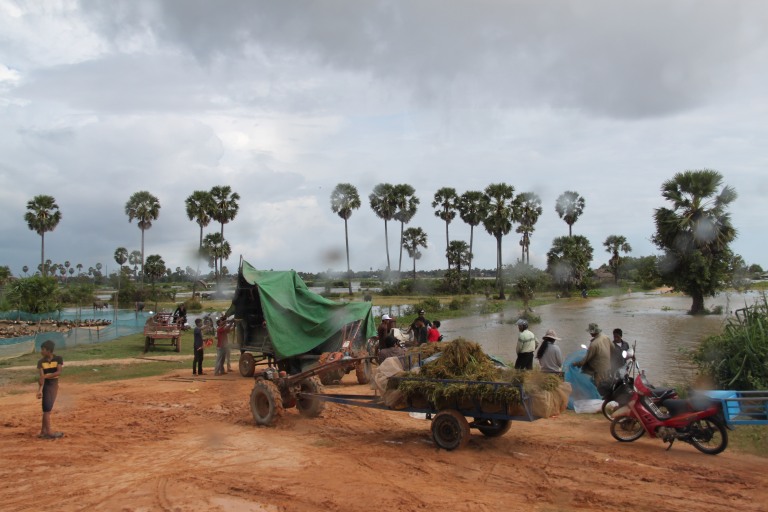 The day we arrive in Siem Reap there is little rain – we just have a short drive to the riverside to have a look at the floating villages and the people living with their houses over here and floating together with their houses for hundreds of meters back and forth along the riverside every day. We observe the kids swimming in the water or paddling in their vessels or trying to show us some snakes or sell us something. An interesting and very special life that exists here. 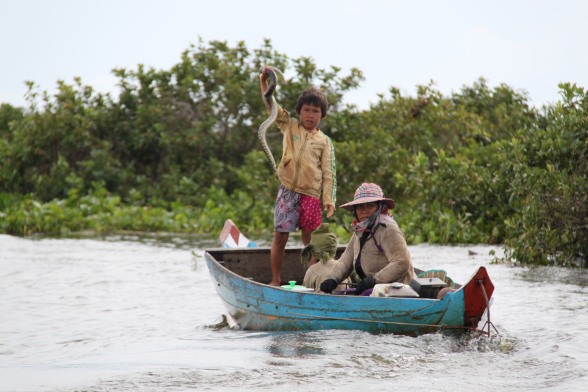 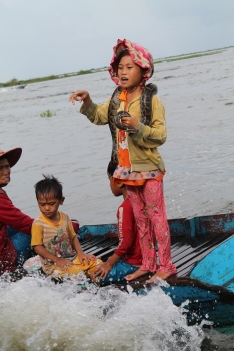 On the next morning we have a tough program. Our goal is to visit Angkor Wat – one of the New 7 Wonders of the World (2007). I have heard so many things about Angkor Wat but do not really know what I am going to expect – not knowing that it will be one of my most favorite destinations in the world.

After a 20 minutes drive from Siem Reap through the dense forest we arrive at the historical site. We park our car and need to walk a few hundred meters to the entrance.

The whole complex of Angkor Wat consist of hundreds of temples about 5 miles north from Siem Reap, stretching over an area of 400 square kilometers and was constructed in the 12th century ( 1113 – 1150 ) by Suryavarman II, a Hindu King, and is today supposed to be the largest religious monument on Earth. It is supposed that Angor Wat was probably the biggest city in the World with about 1 Million population in the 12th century.

Initially Angkor Wat was dedicated to Vishnu, a Hindu deity, and later converted to a Buddhist temple in the late 13th century and is still used by Buddhist monks even today. The original outer walls of the site were once embracing the temple, the city, the palace with an area of 203 acres but there is nothing left from these city walls anymore.

When Angkor Wat was built, it served as the capital of the Khmer Empire in those days – in the Khmer language Angkor Wat means the “city of temples “. Unfortunately the site lost its political, cultural and commercial importance in the 13th century since the capital was moved and it was beginning to drop into deterioration. It remained just important for a few Buddhist monks till the 19th century and was a lost city for hundreds of years

It was in 1840 when a French explorer, Henri Mohout, rediscovered the region. The city was totally overforested and difficult to access with a lot of mud and water around. Huge trees were embracing the buildings , the walls , the gardens and it was looking totally unreal – as if the city was sleeping for hundreds of years and now awaking again.

We take an elephant ride to enter the site as I imagine how beautiful it will be and actually it is. The elephant is huge and while he is walking the path he is softly swaying us from the right side to the left side into a beautiful dream.

( In those days I was not aware of what it meant to the elephant as I thought that we do not harm him .Later on when I visited Africa and studied a lot on elephants in Asia and Africa I found out how badly they are treated and also hunted everywhere and got the awareness about them and also many other animals – since then we are very very careful and I would never do a ride like this any more in my life since I know how heavy the seating is + our weight and how the animals are treated by their guards . I even have adopted a little elephant baby in Kenia, named Naipoki , and  I am its mom – so our point of view and awareness totally changed but to keep the information authentic and correct I wrote about the ride here – actually I admire and love elephants a lot – this is why – I feel sorry )

I can fully imagine how the old emperors and people were entering the site in the ancient times.

We arrive at the moat and pass the bridge where there is a 7 headed Naga at each side. The Naga is a semi divine snake figure which is half cobra and half human in the Hindu Mythology and is usually a door guardian and supporting the wellbeing of people. Behind the Naga there is a row of lots of Buddha sculptures at the bridge side and at the end of the road there is the narrow entrance gate with 3 Buddha faces which is one of the ancient city gates of Angkor Thom, the city that belongs to the complex that we are going to explore first. 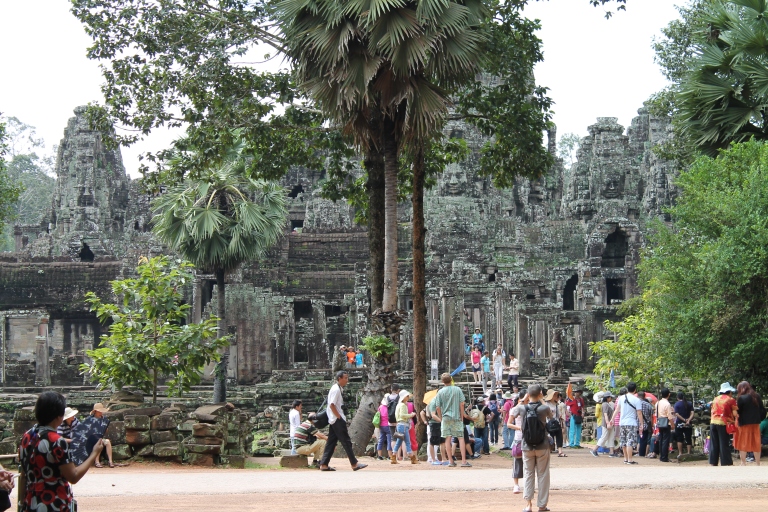 First we enter Bayon which is also called the “temple of the faces ” with its iconic visages right in the heart of the Angkor Thom. The Bayon is constructed in 3 levels while in the first level there is a huge rock with beautiful carvings with scenes from the naval battle between the Khmers and the Chams and from daily life in Cambodia in the 12th century – elephants , warriors , mythological figures , Apsara dancers…

The apsara dancer actually dates back to the 7th century in Cambodia and is a traditional dance of the Khmer culture and has its roots in the Hindu as well as in the Buddhist mythology where the Apsara dancer is a female creature descending from the clouds and heaven and entertaining the Gods and Kings with their beautiful dance. In 2003 the Apsara dance was recognized by UNESCO as a Masterpiece of Oral and Intangible Heritage of Humanity.

In the 3rd level you will find lots of faces of Buddha carved into the rocks in different heights , different sizes and directions. 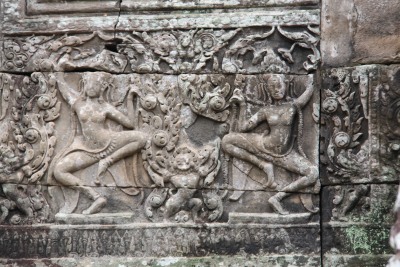 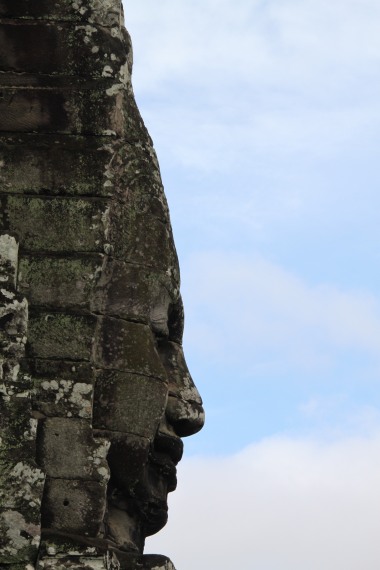 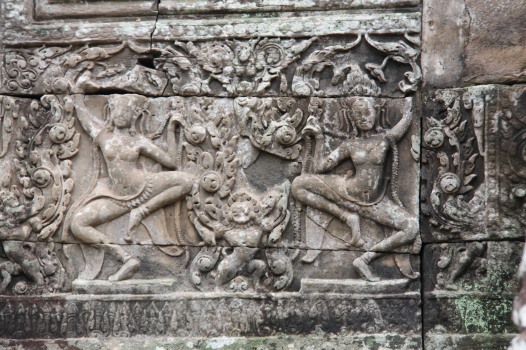 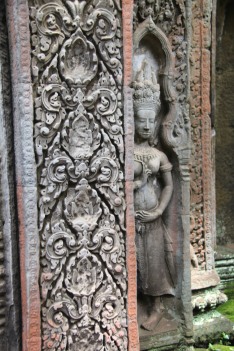 The next part of the city that we are going to explore is the Ta Prohm temple which is one of the most well known temples in Angkor Wat. The ruins are totally overgrown by the jungle and massive roots are growing out of the walls of the temple which makes the location look very spooky and very unique.

Huge trees embracing the ancient ruins with their long and old roots and arms. Shades of all green tones of the jungle are mixed with the greys of the ruins and giving the whole site a very unreal and be-hexed look.

Some scenes of the famous movie ” The Tomb Raider ” with Angelina Jolie were also filmed here in Ta Prohm.

Our next destination within Angkor Wat is the ‘Terrace of the Elephants” which is really awesome !

The famous terrace of the elephants was also built in the 12th century and was stretching for about 300 meters from the Bayon to the Leper terrace. The terrace was forming the Eastern boundary of the Royal Palace grounds. It was facing the parade grounds where processions, parades, festivals, games or other events in the city were held. The King was using this terrace to observe these public ceremonies and it was also used as an audience hall for the King.

The terrace is consisting of huge elephant heads with trunks coming out of the wall and the trunks serving as pillars . 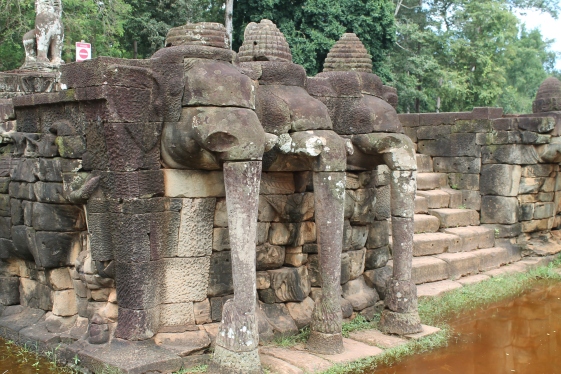 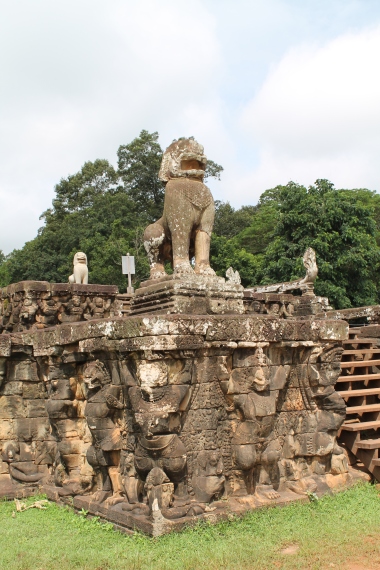 Around the elephant terrace there are again lots of carvings of Nagas, multiheaded horses, monkeys, buddhas, Apsaras, warriors, garuda birds and other mythological sculptures.

From here onwards we move to the main temple of Angkor Wat.

The central tower of the main building is 65m tall and is surrounded by 4 smaller towers and by several walls – this arrangement is symbolizing the Mount Meru which is a place in the Hindu mythology which is supposed to be beyond the Himalaya mountains and the home of the gods. The moat around the building with its water is symbolizing the ocean and the Naga snakes in front of the temple are here symbolizing the rainbow, bridging the way for the people who want to reach out to the kingdom of the gods.

We want to go up to the higher level of this iconic temple. There are very steep stairs to ascend which are also called the “Stairway to Heaven”. It is a challenge to climb up to the “Kingdom of the gods “- but the view , the great scale and the workmanship with its sculptures over here is really marvelous. 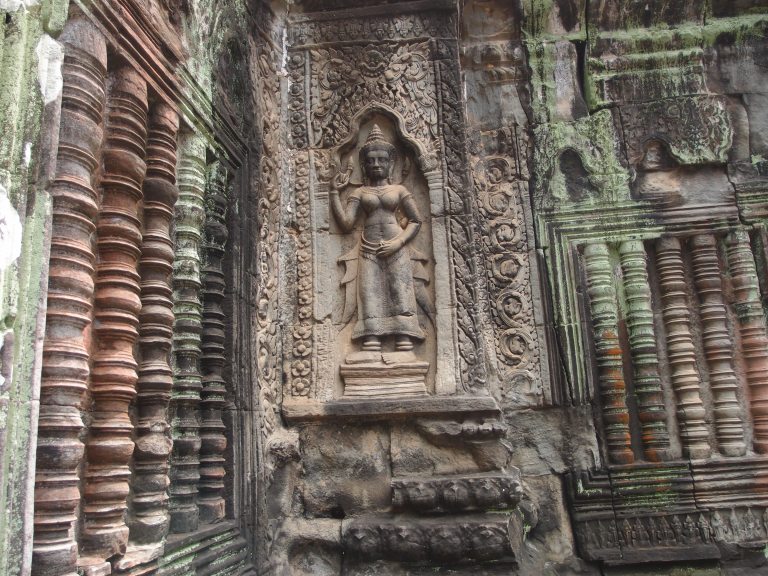 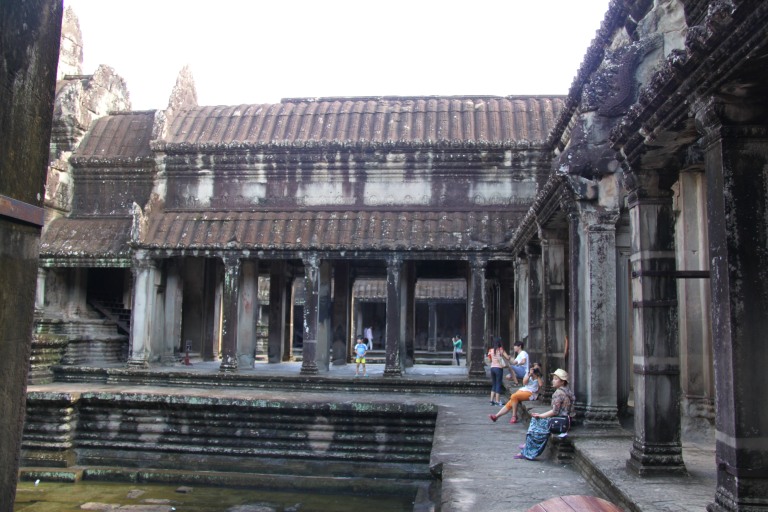 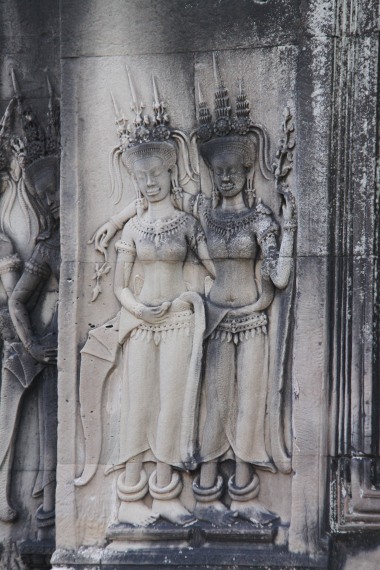 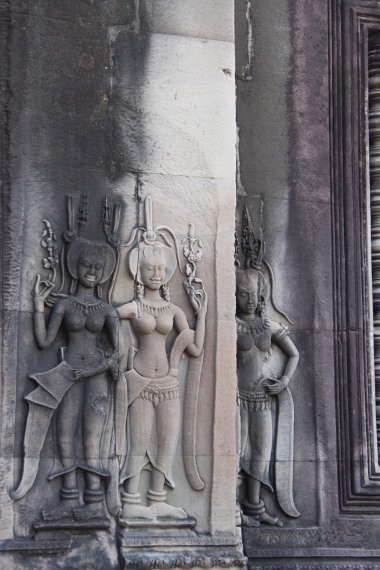 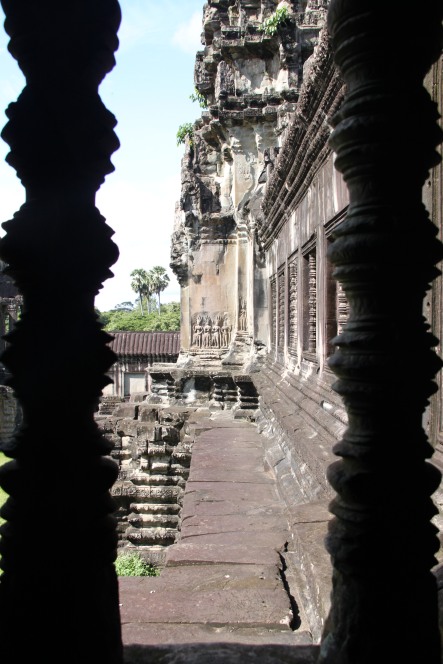 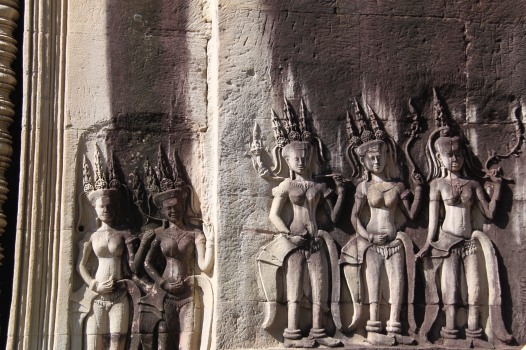 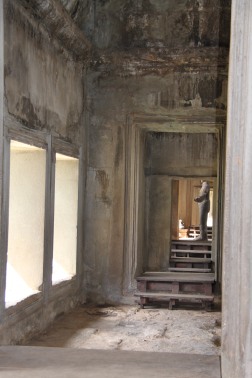 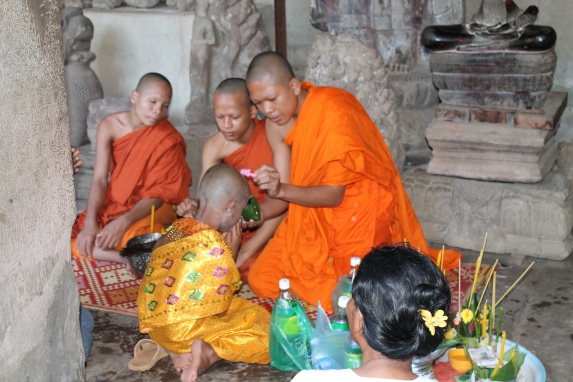 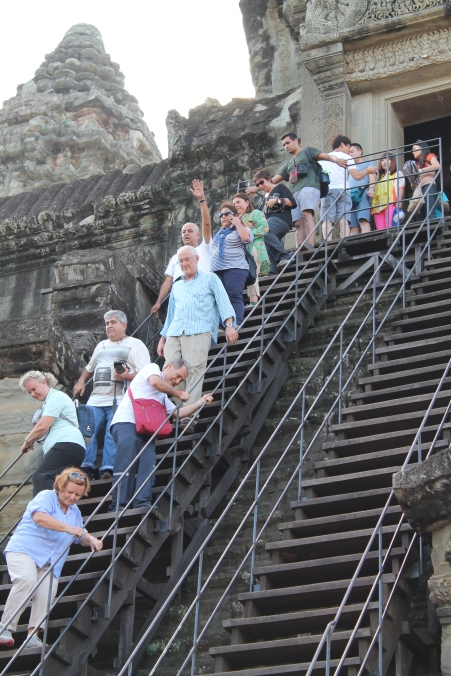 Here is the heart and the soul of Cambodia and their national pride. We are overwhelmed of the beauty and the mighty of this temple building. More than 3000 Apsara carvings allover the building, each one unique, lotus flowers on the one side and the real monks which are sitting in small groups in their orange colored dresses holding their small processions here quietly with their believers on the other side. It is also that the site was always alive – even it was hidden in the jungle and somehow lost but there were always monks in the site living here and holding their processions here since hundreds of years.

I can’t tell it in a different way – Angkor Wat I believe is the most gorgeous and impressive historical site that I have ever experienced throughout all my travels so far. It has a very special energy – it is still living. The shades of the past and the shades and colors of today are just melting with each other. You can even somehow smell the past which is mixed with the smell of the nature, the jungle, the lotus flowers, the mud and the sun – it is unbelievable !!!

We explore the upper level of the temple and look down to the main entrance where at each side there is an ancient library and there are 2 pools full of lotus flowers in pink color.

Along the sides you can see the Naga snakes. At the main entrance you can see the lions with the palm trees in the background.The blue sky is melting with the grey- green stone of the lions and the stairs and the temple’s roof overviewing the whole place while the sun is getting weaker. 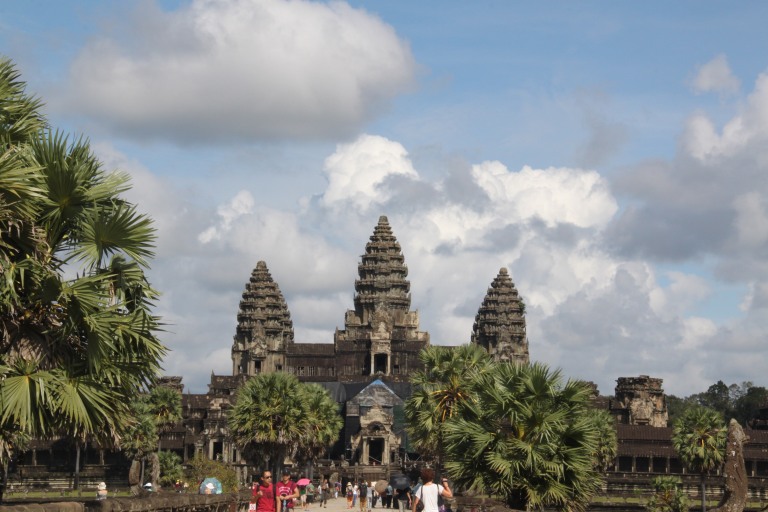 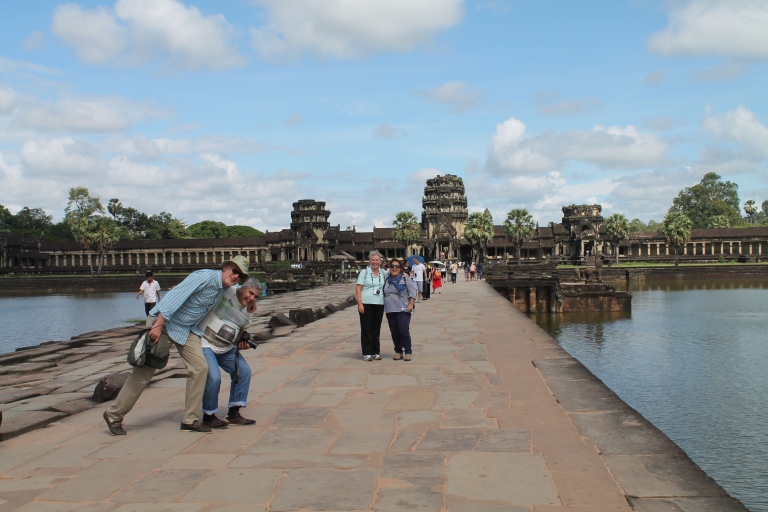 Since 1992 Angkor Wat is a UNESCO World heritage site.