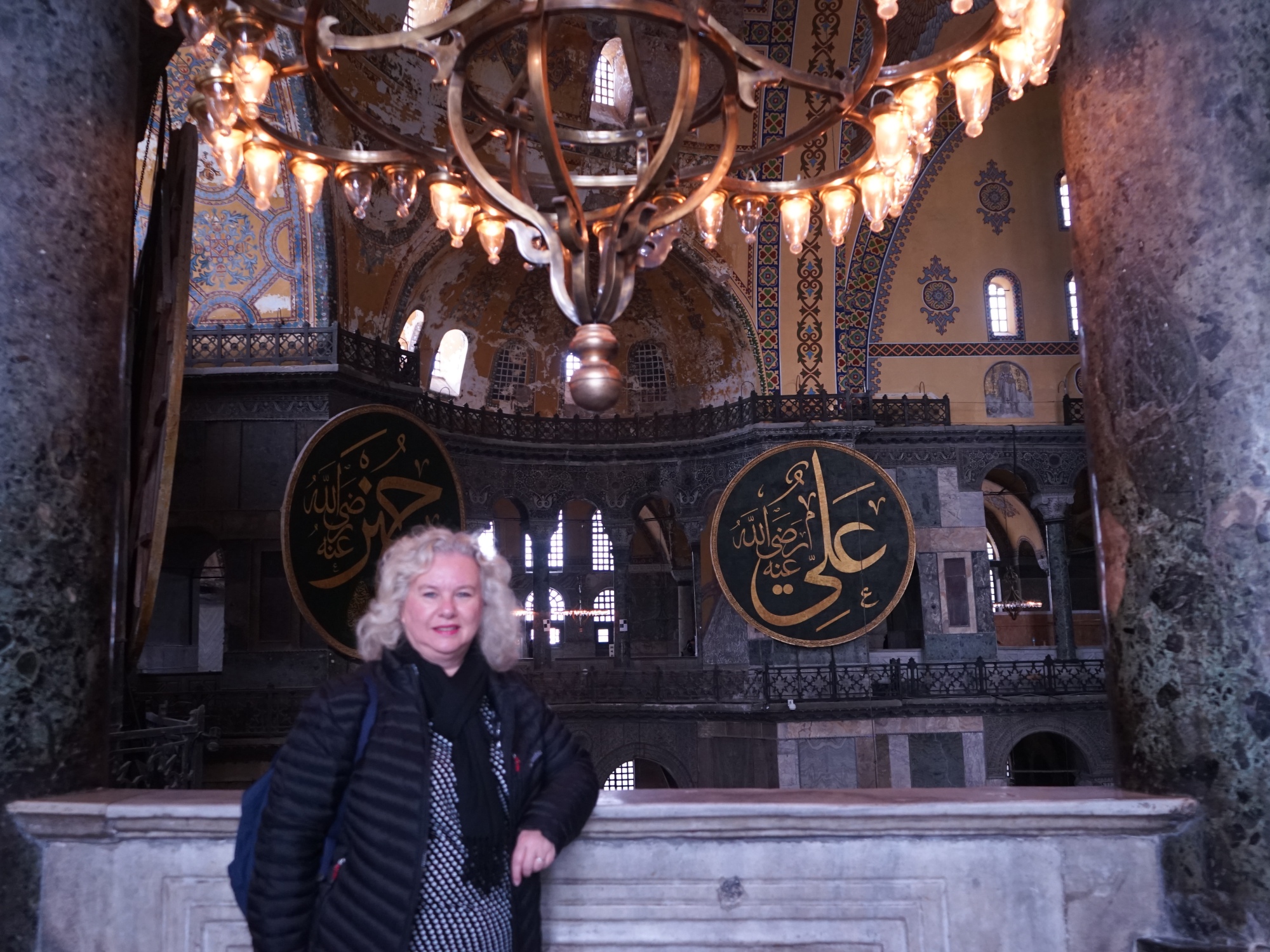 Istanbul – one of the most marvelous historical cities in the World , thousands of years old , a beauty at the blue Bosphorus , being the bridge between the East and the West witnessed old civilizations since centuries.

It is a winter morning in December and we decide to take a trip to the Old City of Istanbul and take the traditional ship from Kadikoy in Asia to Karakoy on the European side . 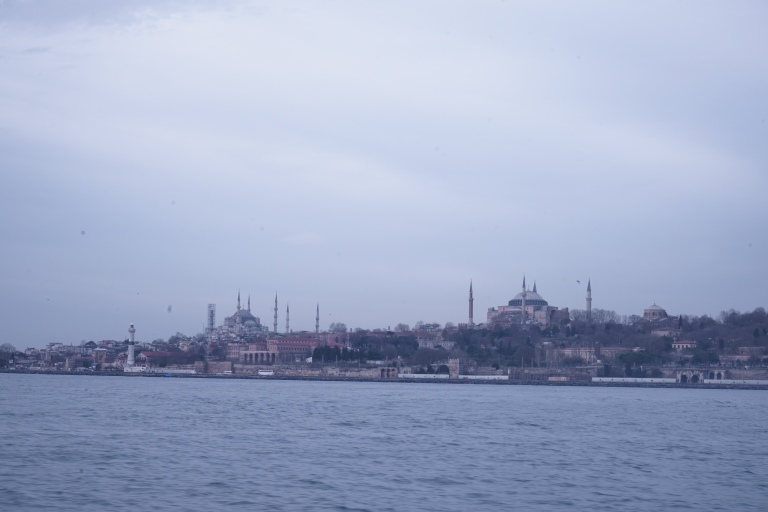 When arriving at the Karaköy pier it is a must to buy some “simit “, a kind of bagel with some sesame and soo delicious . The best is that you eat it with some white cheese and drink some traditional Turkish tea. 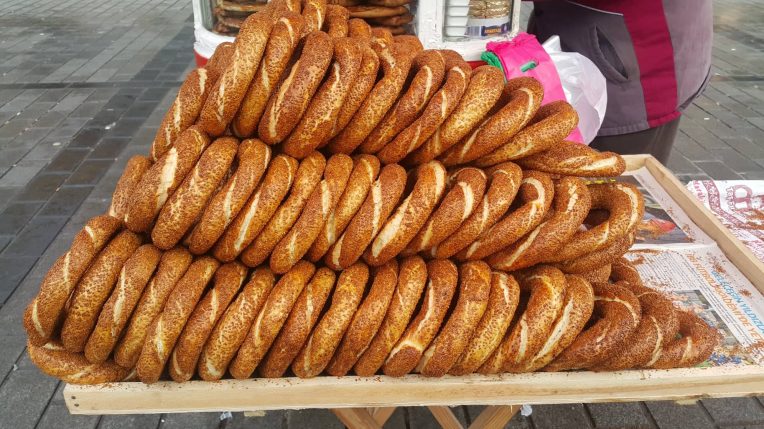 From Karakoy we take the tram , pass the Galata Bridge and drive upwards the hill into the old city , to the most historical part of Istanbul, Sultanahmet.

Our goal is to visit the famous Hagia Sophia Museum close to the entrance of the Topkapi Palace Museum and just opposite to the Blue Mosque. 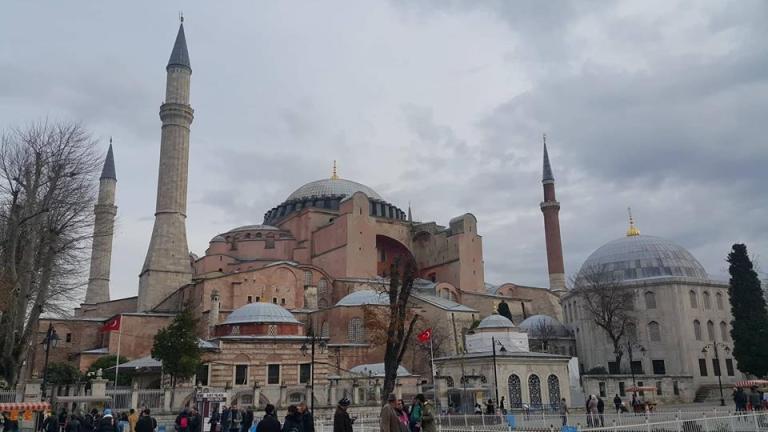 It is one of the places that you can visit again and again – you will never get bored but each time deeply impressed by the magnificent and huge building. It is as if history is just living here. 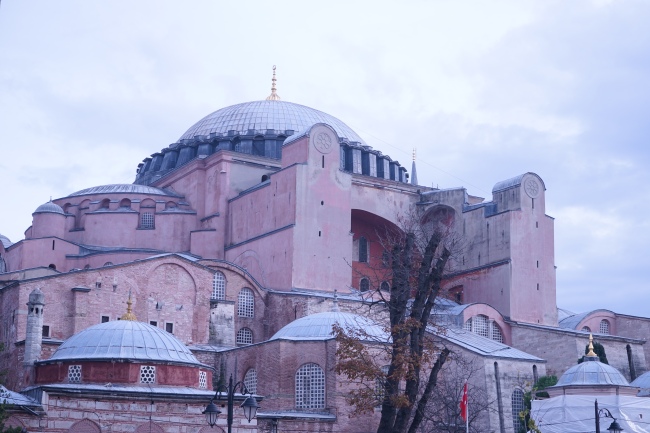 After the entrance area of the museum we arrive at the garden in front of the building.

The Hagia Sophia was generally rebuilt 3 times and here in the garden are some rests of the ruins of the buildings façade from the ancient times. 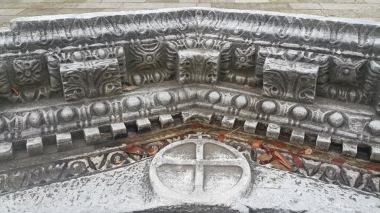 The Hagia Sophia, also called Church of the Wisdom, was built on the foundation of a Pagan temple. Later in the 3rd century a little church was built over here while in the 6th century under Emperor Justinian it was rebuilt and became  one of the huge and most impressive buildings in the Byzantine period. For more then 1000 years it became the Ecumenical Patriarchate of Constantinople as Istanbul was called in the old times .The cathedral with its length of 100m and its width of 69.5 m even today is one of the biggest and most important cathedrals in the Christian world.

We enter the building through the “Emperors Gate”. The paintings and mosaics at the entrance are marvelous.

There are different doors leading into the inside of the building – the “Emperors door” which was the largest one with being about 7 m wide and used by the Emperors only since the 6th century, the nice door which is the eldest part of the building and is dating back to the 2nd century BC. 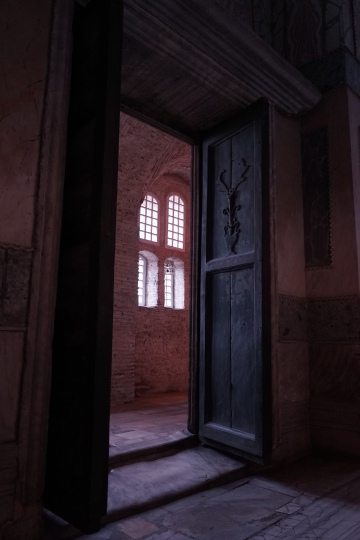 Once we step into the main building the atmosphere is gorgeous as the inside is enlightened by many chandeliers. The view is breathtaking. 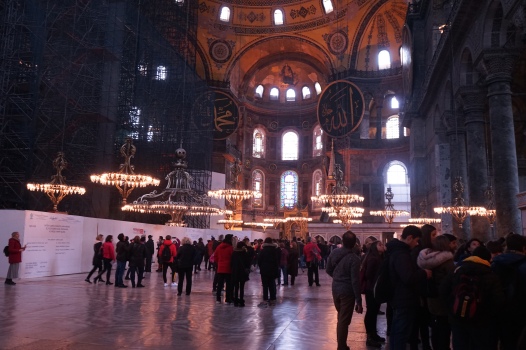 The Hagia Sophia was a very important location since Constantinople was East Rome during the Roman Empire and a place where also the coronation of the emperors took place. This is called the Omphalion and is marked by a big circle being rounded by other smaller colored circles on the ground.

1453 actually becomes a turning point for the city and the Hagia Sophia.

In 1453 the Turks took over Constantinople under Sultan Mehmet II the Conquerer, the city became the Capital of the Ottoman Empire and was called Istanbul , while a minaret , a minbar , a chandelier and a mihrab were added to the building of the Hagia Sophia and the cathedral was converted into a mosque.

The Hagia Sophia was used as a mosque for more then 400 years .

At the backhand side of the Hagia Sophia the Topkapi Palace which was home of the Ottoman sultans by then for 5 centuries, was built. 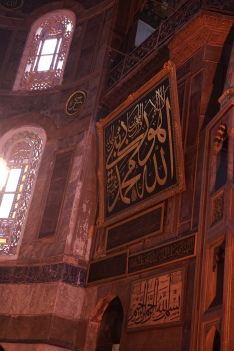 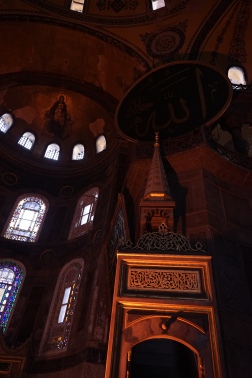 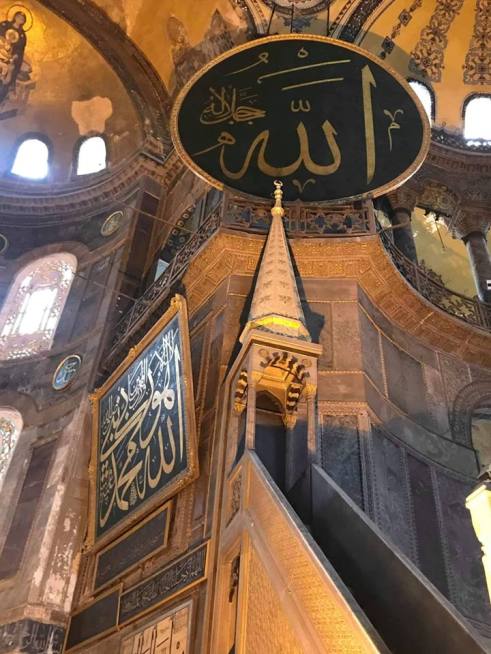 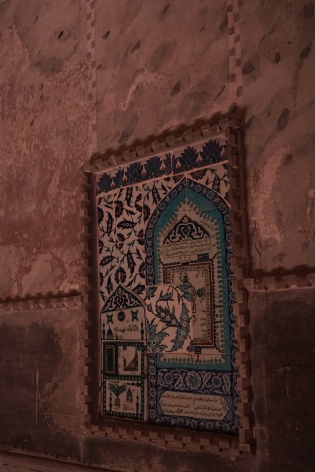 After the foundation of the modern Turkish republic in 1923 the building became a museum in 1934 under Mustafa Kemal Ataturk, being part of his secularization policy and  was incorporating a famous church and a great mosque in one.

In the building the Christian wall paintings and mosaics are to be seen side to side with all the Islamic symbols and calligraphic panels which is quite unique .

This is maybe also one of the reasons why this building has such a great positive energy as the two world religions succeed in being in peace with each other over here in this location. You can really breathe and listen to ancient history  and peace in this gorgeous and gigantic monument.

The Museum is even today an architectural miracle with its huge dome being about 32 m wide and having a height of 55 m  and which is firmly standing at its place since the 5th century surviving lots of earthquakes , fires and wars in the city .

In the inner side of the building there are about 40 columns in the lower gallery and 64 columns in the upper gallery made out of marble that was brought from different ancient cities from Anatolia and Syria eg from Ephesus , Aspendos and others .White marble was brought from Marmara Island  , pink marble from Aydin , green marble from the Egriboz Islands and some yellow marble from North Africa . There are even pillars which were brought from one of the ancient World Wonders , from the ancient Temple of the Artemis in Ephesus which are used in the naves of the cathedral . 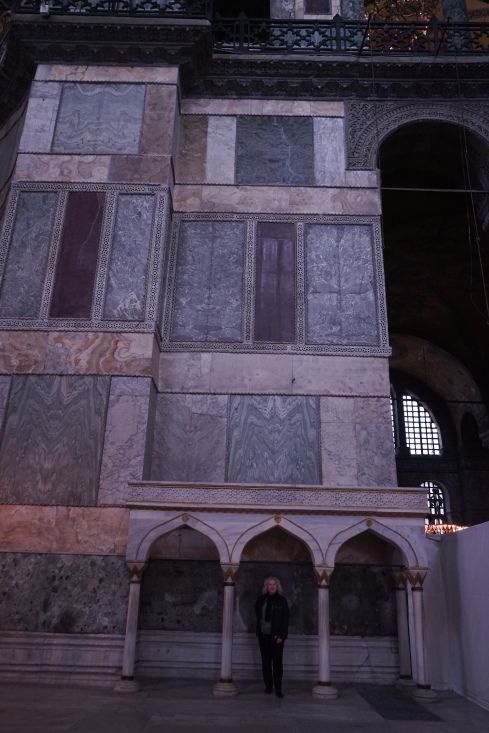 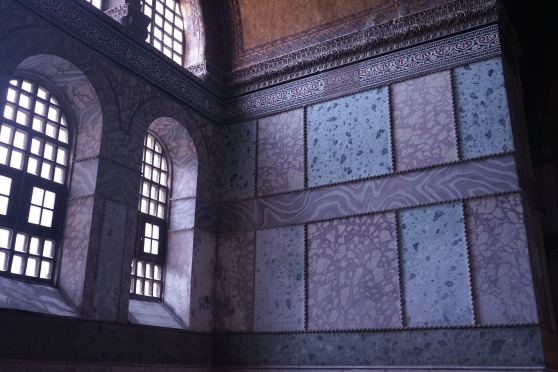 The walls of the building are covered with beautiful mosaics made of gold , silver , glass, terracotta and also other colored stones. 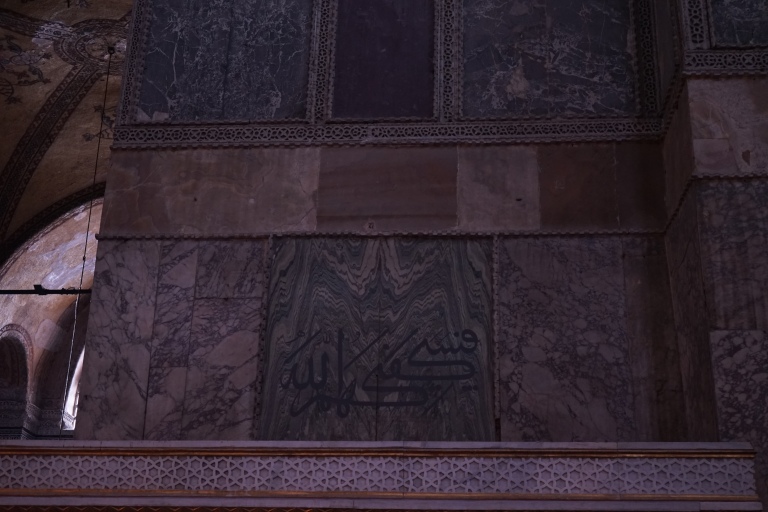 In the main gallery there are 8 round panels which are about 7-8 m wide with calligraphic inscriptions which are the names of Allah ,prophets Hz. Muhammed  and several caliphs of the Islamic World like  Hz. Ebubekir , Hz.Omer and others.

The calligraphy is an ancient Art of Beautiful Handwriting and these calligraphic panels are the largest and most famous ones in the World . 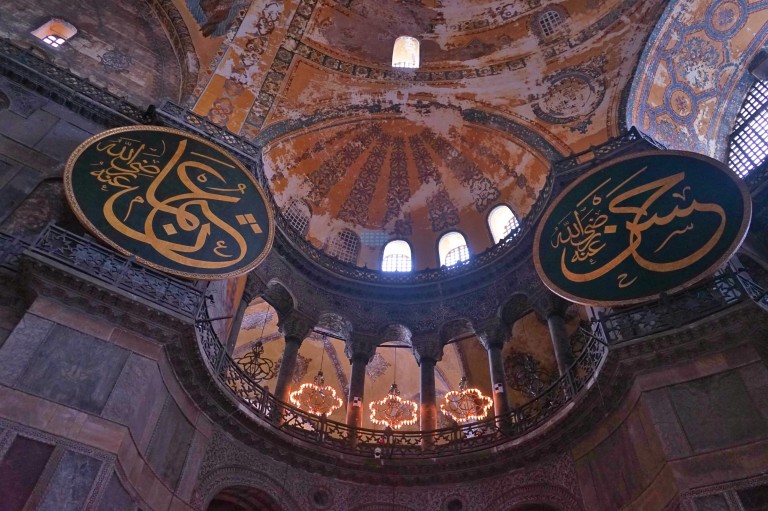 On the apses of the cathedral there are 2 angel mosaics on the wall which are angel Gabriel and angel Mikhail . It is as if these angels and all the holy scripts are really protecting this monument since hundreds of years and hopefully also in the future .

The most important and probably the oldest historical mosaic in the building for sure is the one with St Mary with baby Jesus on her lap and Constatine and Justinian at her side.

The mosaic dates back to the 9th century and is located at the door of the inner narthex .

In mid of this mosaic St Mary is sitting with Jesus on a kind of throne while Emperor Constantine , founder of the city ,on her left hand side is holding a kind of small model of Constantinopel ( Istanbul ) in his hand and presenting it to St Mary while on her right hand side Justinian is shown offering a small model of the Hagia Sophia Church to her .

St Mary is also known as the patron saint of the city.

In the inside area of the lower gallery there are also 2 huge marble cubes which were donated by the sultans and filled with water to be offered to the visitors and prayers especially in summer times .

The weight of these marble cubes is more then 2.5 tons .

After having visited the lower gallery we take the steep passage at the right hand side which leads to the upper gallery .

In the upper gallery the mosaics are one of the best reserved ones from the Byzantine times . The huge mosaic  wall  shows Jesus in the middle with St Mary at the left hand side and Johannes at his right hand side .

At the back side of the upper gallery there is another beautiful golden mosaic with St Mary and Jesus in her arms .

Again the decorations and colors at the wall , at the arcs and at the pillars are awesome. 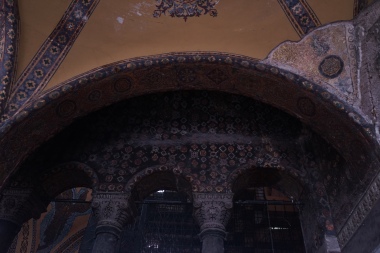 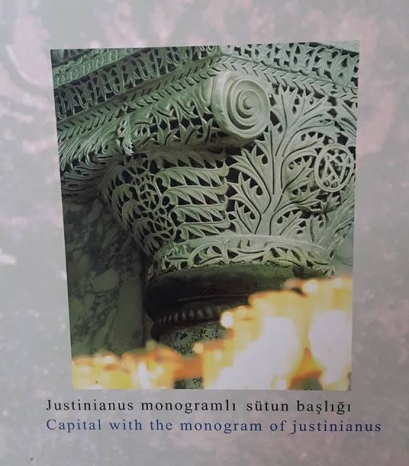 At the upper gallery there is also the gallery of the Empress with a gorgeous view down to the lower gallery . 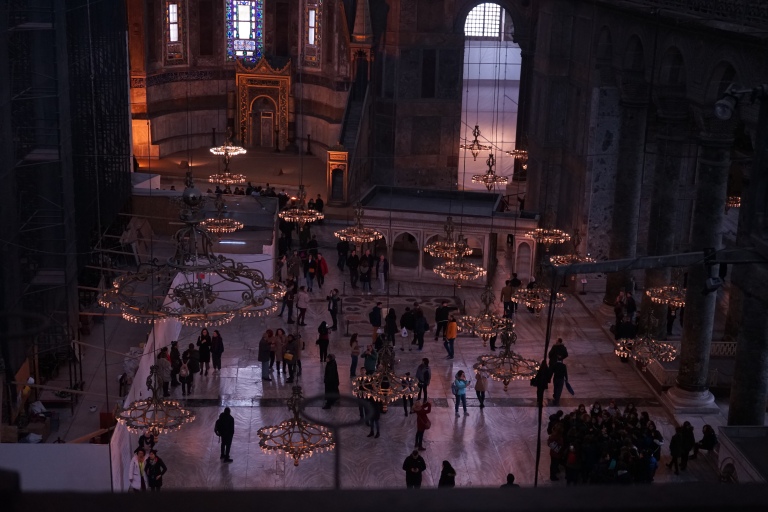 On the upper gallery there is also the ancient entrance of the Patriarchate – so many gates,doors and stairs somehow hidden in the ground.

When leaving the building downstairs there is also a little exhibition showing pictures from the old days of the Hagia Sophia – so impressive how the surrounding of the building changed throughout the centuries .

Here is a picture reconstructing Roman Emperor Justinianus leaving the Hagia Sophia after a ceremony . 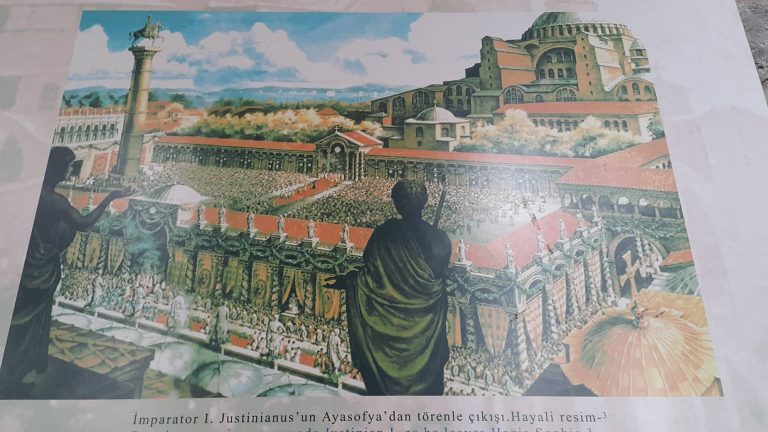 This is a picture showing the Hagia Sophia and the Hippodrome place with its obelisks and the Column with the 3 Serpents Heads in the ancient times .

At the exit area there are also important inscriptions which are the stucco copy of the decisions taken in the Synod Assembly ( Spiritual Assembly ) in 1166 that was held in the Hagia Sophia . 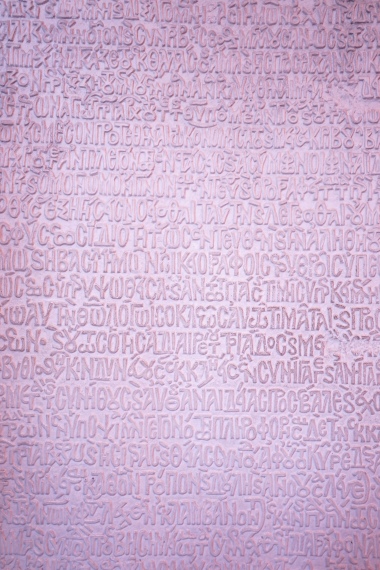 At the exit of the building there is the ancient baptistery at the left hand side .

At the other side of the baptistery there are the graves of the old sultans of the Ottoman Empire. 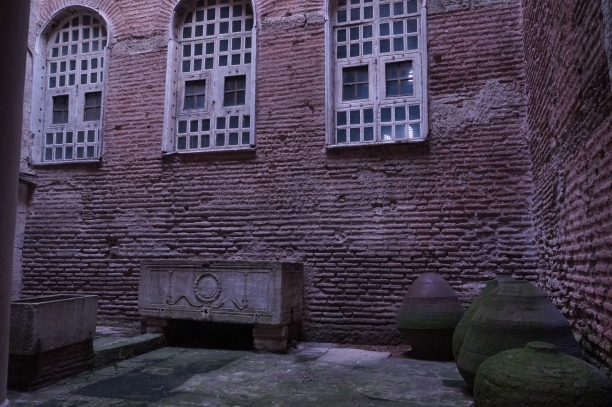 There is also a beautiful ablution fountain ( sadirvan)  in the garden of the Hagia Sophia which is built in the 17th century which was used by the visitors and prayers cleaning themselves due to the religious rituals before entering the mosque and the holy places . 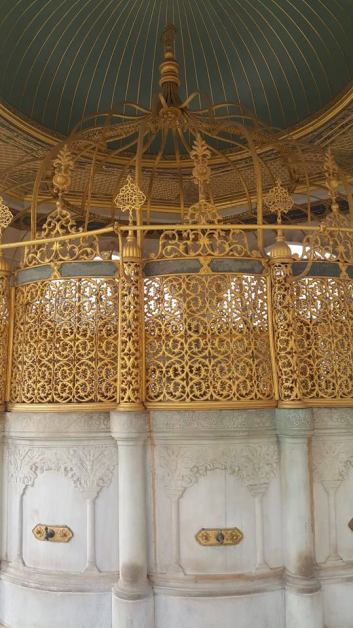 Right at the exit of the Hagia Sophia complex there is also the little Muvakkithane building constructed in 1853 by Sultan Abdulmecit which has his own unique importance as it was the first institution defining the different timelines of the daily prayers .

In 1985 the Hagia Sophia together with some other major ancient buildings in Istanbul in this part of the old city became UNESCO World Heritage.

It is a again a day where I leave this awesome architectural and mystical building being deeply impressed .

For me it is a symbol of World Peace as everybody can enter this holy place and museum in one and admire the elements of Christianity and the Islam knowing that the building is situated on an old Pagan temple – what big opportunity of Tolerance and Peace it is …and it shows how important Secularism is .

The Hagia Sophia is like a Beauty , a Queen that is sitting on one of the hills of great Istanbul , overlooking the Bosphorus , history and the people that are passing by this place since thousands of years and also facing the gorgeous Sultan Ahmet Mosque or Blue Mosque as it is called .

I am leaving the place , taking the tram to old Pera to have a cup of tea at the famous Pera Palace Hotel and let the gorgeous impressions of the Hagia Sophia sink into my soul.

One thought on “The Hagia Sophia, a splendid historical monument in Istanbul”