I have lots of dreams and one of them was to visit South America. I heard so much about the continent but certainly wanted to experience it by myself . The part of South America that was attracting me the most was the magnificent beauty of its nature and its history.

In February 2019 I seriously needed a break – daily life and business was so tough which exhausted me and I needed to breathe. With a very fast decision we took the opportunity to travel for a few days to Brazil and to Argentina.

What a good decision it was – after a snowy night in our home country , we arrived in South America, weather is marvelous, we have 25-26 degrees , the air is clear and bright -what a fun for our souls . The sun was deeply shining directly into my heart -this is definitely what I needed.

We travelled to Buenos Aires, a huge colorful city with a lasting memory of its iconic personality of Eva Peron.  When walking through the streets of Buenos Aires I felt somehow different but could not really define what it is. 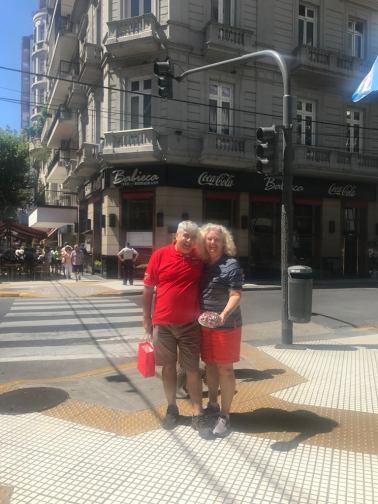 The longer I thought about it , the more clear it became to me – certainly it is just a personal feeling – it was some kind of sadness that I felt here. When analyzing why, I came to the insight that it has several reasons  – it is the Plaza de Mayo , the place where Grandmas were gathering to ask where thousands of their lost grandchildren are since many many years without achieving any results – it is the change of the political governments from revolution to revolution , it is the history of the country and life of Eva Peron – who had an immense influence to the people , the culture and the state , having a difficult lifetime and a sad end of life.

Somehow I felt that all these different events gave the city a melancholic face – even the tango that you can sometimes hear here and there sounds somehow a little bit sad and serious to me .

While walking through the streets I also recognize that all the buildings and streets did not change in the past decades so that it seems as if the historical events are still alive .

When you look at old historical pictures of Buenos Aires you can easily find out that the city did not change at all.

First let us dive a little bit into the life of Eva Peron which is so significant for the Argentinian history and people.

Maria Eva Duarte was born in 1919 in Los Toldos , a little town out of Buenos Aires in the Argentine Pampas. She was the youngest of 5 siblings of a very poor family . Her father was rich but not married to her mother . This is why the family was facing extreme poverty and social problems. People called Eva, Evita, signifying sympathy in Spanish language since she was the youngest in the family.

With 15 years old she decided to leave her home village to go to Buenos Aires to become a famous artist , get access to the the higher society and become rich.

In those days she started to work in the Argentinian radio shows – one was the radio drama ” Greatest Women of History ” where she was voicing Queen Elizabeth I , not even having the slightest idea that one day she would become herself the first lady of Argentina and being also a great woman of history .

She was also working as an actress and facing poverty and difficult days during this period of her life.

In 1944 she got to know Juan Peron during a fundraising campaign for an earthquake where he is Secretary of Labor. She started a relationship with Peron and began to support him in his political fight and career as she has a good connection to the working class people , especially the meatpackers in Buenos Aires.

They became a couple and with the leadership of Eva Duarte , Peron got an immense influence onto the working class and the society .The Government officials feared his influence and got Juan Peron arrested.

In those days the speech that Eva Duarte held on the balcony of the Casa Rosada to give Peron her strongest support became very famous . 300.000 people gathered in front of the building  and protested altogether with her against the arrest of Peron .

The movement was that powerful that the government was forced to release Juan Peron. In 1945 Juan Peron married Eva Duarte and she became Eva Peron. 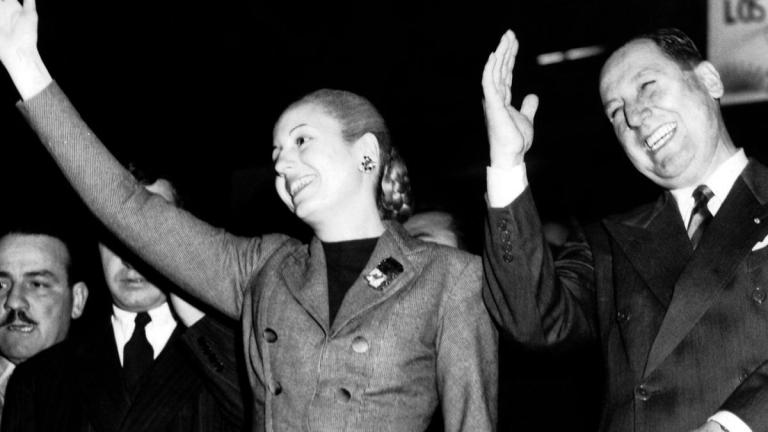 Evita was full of desire for power and had 2 faces – one face was the smiling face to the crowd and to the poor . She built the Eva Peron Foundation.

Eva was helping the poor and sick people personally and supporting them financially with the foundation. People loved her intensively as she was coming out of the same social class and she had a good understanding for their misery and found real solutions for their problems.

On the other hand Evita was very rough , rude and tough towards the oligarchs , treating them badly and trying to get money from them for the poor. She was even very cynical in doing this as she was in love with luxury by herself.

This is why on the radio station in Buenos Aires on the street of the 09th of July you can see the image of Evita on the one side crying into the microphone and on the other side having a smile on her beautiful face .

She was always in a political fight , supporting her husband , fighting for the working class and trying to get their loyalty and support .

Evita and her husband were worldwide also criticized for their ties to some high ranked Nazi Officials who tried to settle down in Argentina after the WW II with the help of the Peron family.

In 1951 Evita herself tried to become Vice President of the nation as she was hungry for power and historical fame . In the same year she was diagnosed with cancer and was forced to withdraw from the election . Just one year later she died on 26th of July 1952 , in the young age of 33 years , having achieved an enormous career that started in extreme poverty and which ended as the first lady of the nation and being one of the most powerful women in Argentina and in the world for the 20th century.

She could influence hundred thousands of people with her speeches and enthusiasm though she was just an unofficial political leader .

She was the one influencing her husband and the nation to raise social rights for workers and women – the right to vote for women was confirmed in their government period .

She had a restless life and it continued in the same way also after her death. She was embalmed and displayed to the Argentinian people for 2 years.

Shortly after, Juan Peron was overthrown and was forced to leave Argentina. The officials feared Evita and decided to dismiss her body and sent it secretly  to Milan – far away from Argentina as they did not want her to become a myth.

For about 16 years her body was somehow disappeared while she was buried in a Milanese cemetery under a fake name. Later the body of Evita was handed over to Juan Peron during his stay in Spain and in the 1970s her body was sent back to Buenos Aires and buried in the family grave of the Duarte Family in the famous cemetery of Recoleta.

There is probably no dead body that suffered that much in the world until it reached its eternal place to rest. 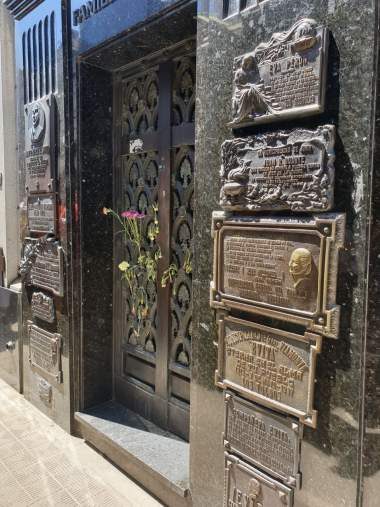 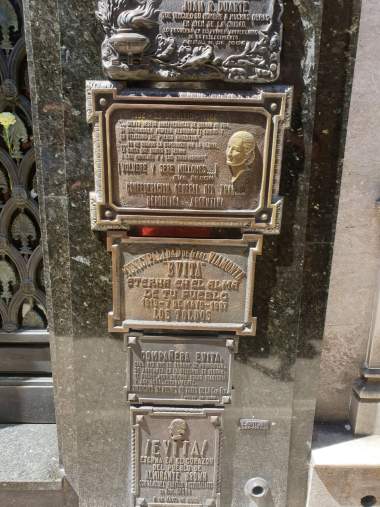 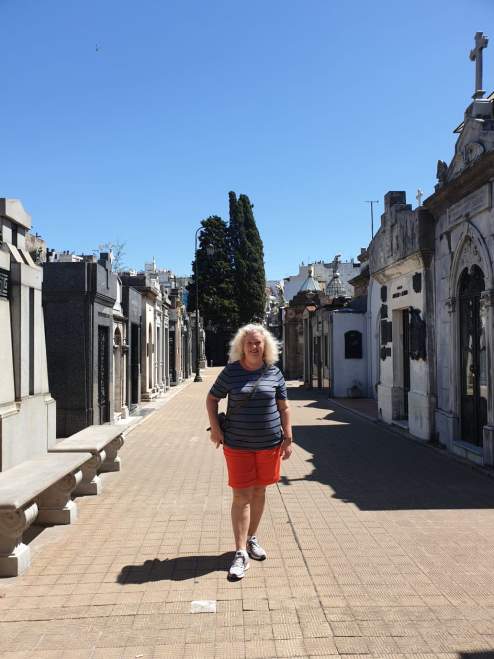 Evita became a worldwide myth , her personality was strong and very unique in history.

Her story was told in many films and musicals with actresses like Faye Dunaway, Madonna, Antonio Banderas and others which underlined her fame.

” Dont cry for me Argentina ” became the famous song of Evita worldwide.

Her personal fight and desire for power and justice , her fight for the weak social classes  and women and the fight against the army and the oligarchs , her early death and her enthusiasm and life of contrasts is today a world wide known part of the Argentine history. 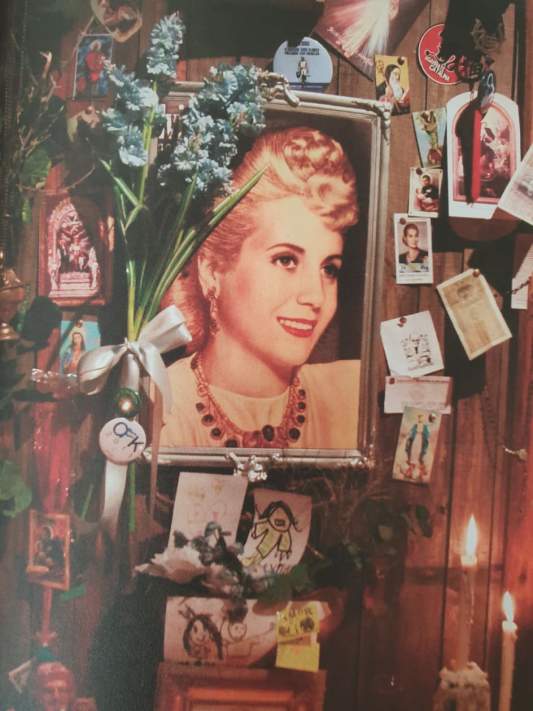 When I stay in front of the Casa Rosada and look at the balcony  where she held her speeches, I can imagine her in person , listen to her voice and feel her charisma and beauty. You can encounter her spirit everywhere in the city. Everywhere you can see pictures or memories of her as people still admire her . 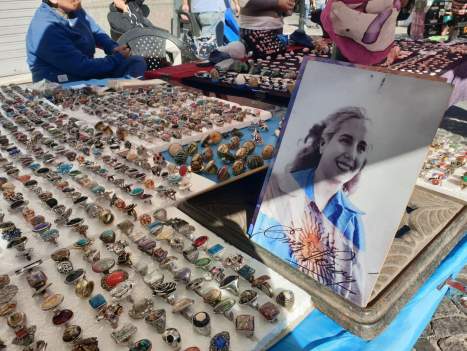 When looking to the broad boulevards of the city, pictures of her official burial came into my mind – nothing has changed – even the faces of the people look the same – somehow a little bit sad …

Some more words to say about the the Plaza de Mayo which is the oldest place in Buenos Aires. It is the place where the most important events took place facing the Casa Rosada on one hand, the National Congress Building on the other hand , the oldest building in Buenos Aires at the other flank and the famous Metropolitan Cathedral. 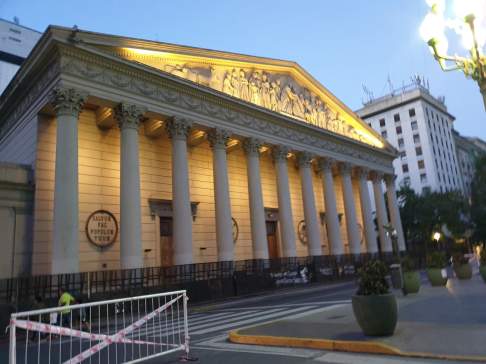 The square was constructed in 1810 to commemorate the first anniversary of  the May Revolution and is a famous historical place where many celebrations as well as protest events have taken place throughout the Argentine history. 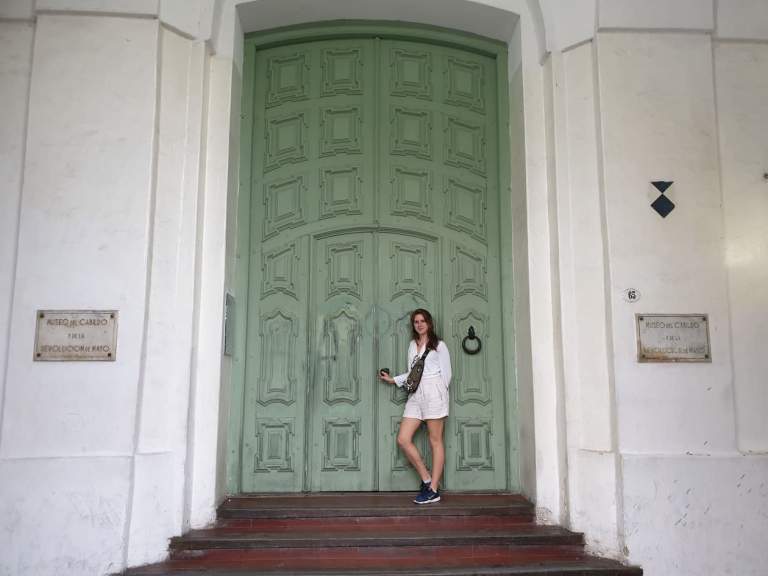 One of the most well known events and protests on this place was the human rights movement of the Mothers and Grandmothers of the Plaza de Mayo where mothers were gathering every Thursday to ask for their “disappeared”  children during the so – called  “dirty war” of the government dated in 1976 – 1983 where approximately 10.000 – 30.000 citizen were killed and never heard of nor found dead or alive again, mostly left wing opponents of the military dictatorship in those days . The protest group started with 14 mothers on the 14th of April in 1977 and the group of people gathering on the Plaza Mayo was growing every week .

Mothers and Grandmothers were standing in front of the Casa Rosada to raise the international interest and awareness of the world for their miserable situation. 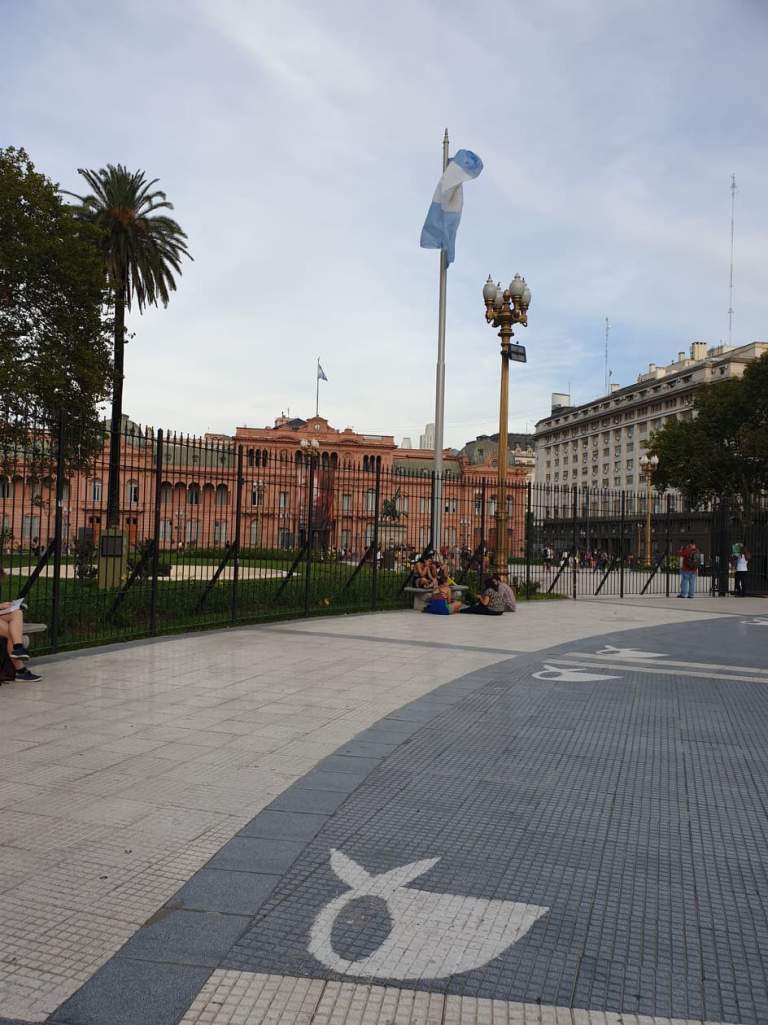 It is since more then 40 years now that these mothers are gathering every week on the Plaza Mayo in front of the presidential palace, protesting the disappearance of their children and becoming a famous human rights movement. The white headscarves that they were wearing became a symbol of the movement. 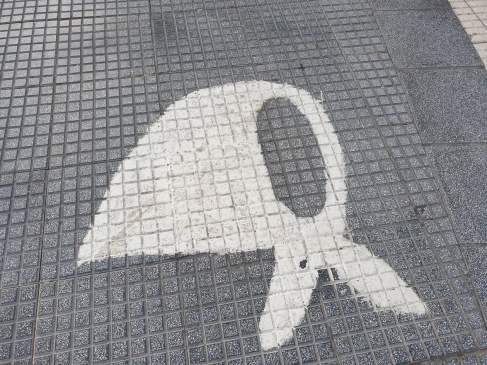 Throughout the decades the families never got an answer to the questions that they raised for their kids .

It is probably also one of the events that makes me feel thoughtful and the place appears somehow grey to me .

So many events where the country and its people suffered a lot in all the decades – in mid of this huge historical city .

This is why people should be happy wherever they live in the world in democracy and live in peace and justice and this is why democracy is so important for mankind , for all us.