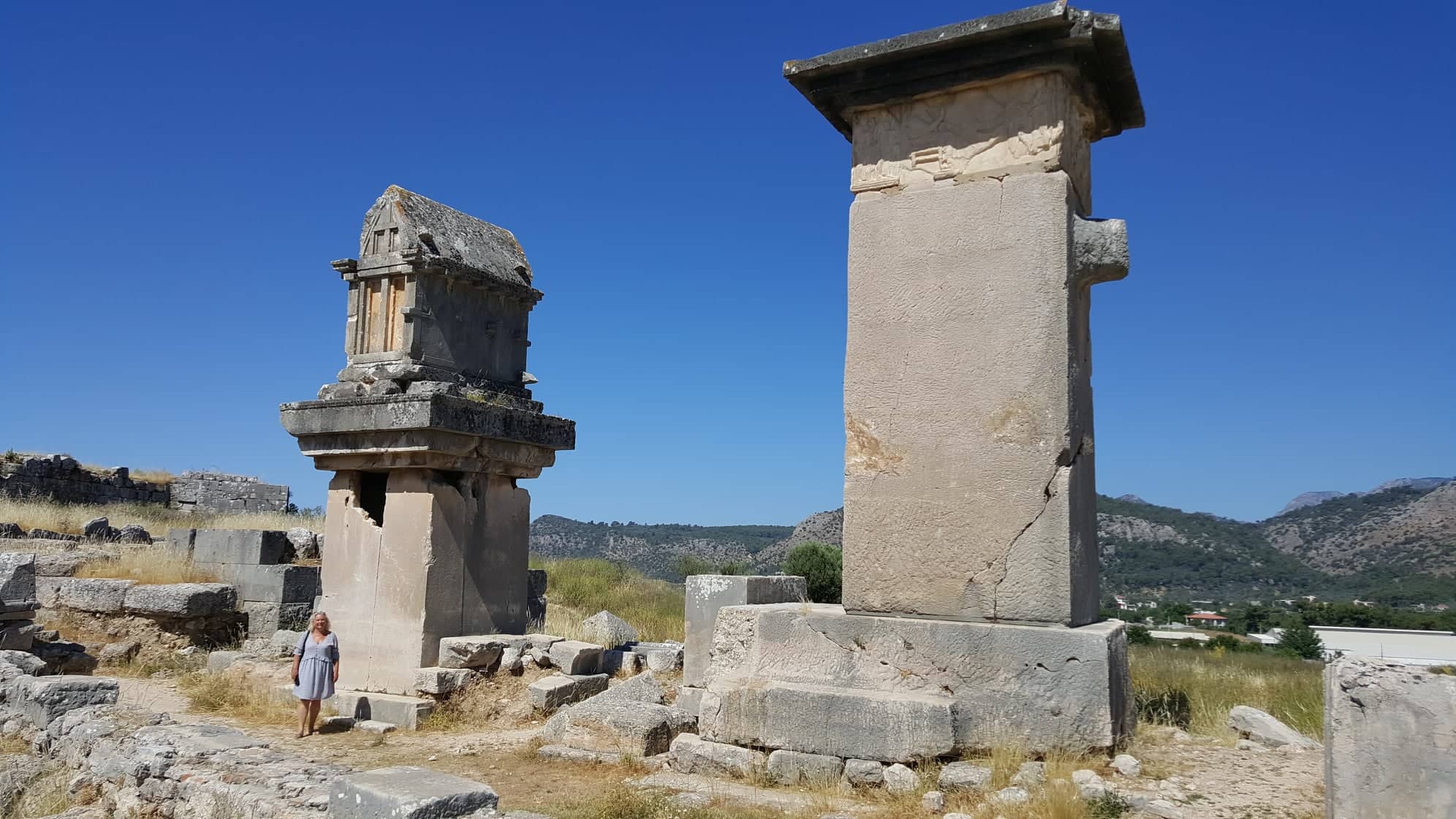 It is in June 2019 when we decide to go to the southern coast of Turkey for the upcoming feast holidays – one of the nicest parts of the country that we visit again and again since many many years.

Our host during our stay is Mr Y. in a little village , back to back with the ancient city of Patara.

Life is very slow here. It is the beginning of summer and though we have nearly 29 -30 degrees, it is not hot as the weather is dry and very agreable . The sun is shining , the sky is also crystal clear.

It seems as if life did not change too much in the past centuries over here.

People are still living in their little villages very modestly and simple, seldom leaving for a different destination. They prepare their own bread . They have their goats , hens , sheep, cows,bees and their dogs. They walk through the fields and the mountains and collect any kind of herbs for medical use, for preparing herbal tea, to use it in their cuisine for cooking or to sell it to tourists.

They cook their corn on the street and also offer it to the passing guests .They gather in the local traditional coffeehouses to have a chat and to have a cup of Turkish coffee or a dark black tea.

Some have boats that they are using for fishing or to arrange daily or weekly boat trips within the area.

The village is very calm and silent, you just hear the whistling of the leaves of the trees and the birds . 5 times a day the muezzin is singing from the little mosque to call for the daily prayer. Everywhere the flowers are growing in their nice colors of pinks and lilacs and whites. 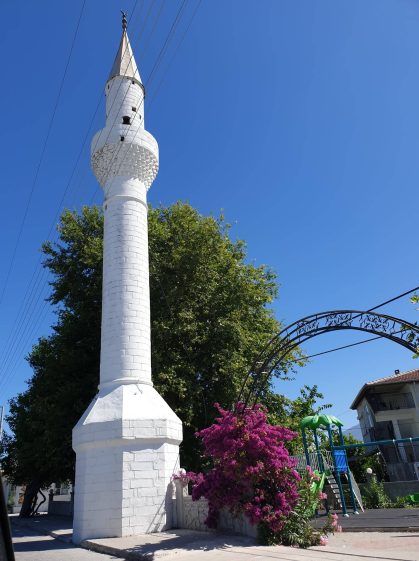 When we sit on the terrace of Mr Y. hotel each afternoon we have a wide view into the valley and see the little houses of the village people and sometimes somebody strolling around . Mr Y. is preparing our black tea and some good pieces of cold water melon when we come back from the beach to rest and to enjoy the silence over here .

This time we will take the opportunity to have a closer look to the Lycian culture and explore its ancient history in the region.

The Lycian way is very close to our location and is one of the longest and one of the top 10 most beautiful footpathways in the world starting from Fethiye to Antalya , actually from Thelmessos and leading via Tlos, Pinara, Sdyma, Xanthos , Letoon , Patara ,Antiphellos,Phellos , Appolonia, Aperlai, Simena , Andriake, Myra ,Olympos , Chimera to Phaselis . In this area there are about 96 ancient cities.

Nowadays there are about 30.000 international and national hikers per year who take this footway along the coastline – the shortcut lasts about 7 days ( 110 km ) while the original path takes about 1 month ( 535 km ) .

During our daily boattrip around Kas /Antiphellos we can observe a group of people with their backpacks hiking in the mountains, steeping down the cliffs to the coastline and walking down the ancient way. 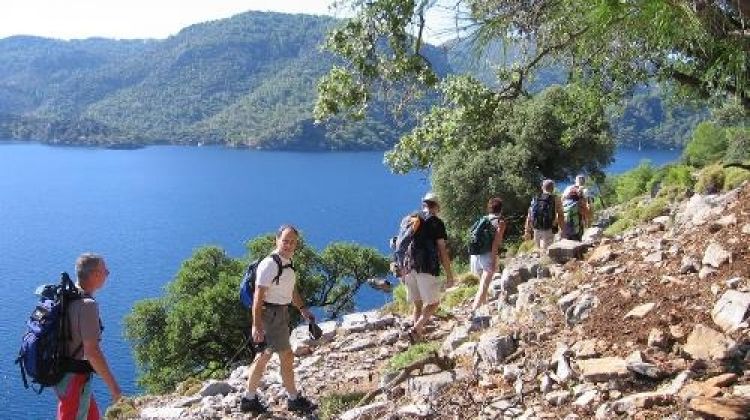 Lycia was founded 7000 years ago at the point where today south western Anatolia meets the Mediterraenean Sea – one of the most beautiful coastlines .

The Lycian people were a very deep rooted civilization .

Though there are many different theories , the root of the Lycian is still not 100% clear . It is believed that these people were deriving from the Luwian people , who were an Indo – European tribe and settled down in this area before the archaic aera .

Later in the year 2000 BC the land was called Lukka which means “the light “or the “sunrise” and was ruled by the Hittits. In all settlements in this region you can find the longest scripts written in Lycian language which give insight into the Lycian culture and history and their special Indo – European language .The texts are carved into rocks or huge monoliths.

In one of the rocks in Xanthos there is a novel describing how the houses were burnt down during war times and how men killed their wives and kids and committed suicide and herewith chose honour and liberty by ending their lives.

It was their decision to live in the light of freedom instead of the darkness of slavery .Therefore the independent days of the Lycian then started in Xanthus in 545 BC during the Persian Wars .After their heavy losses in the war the Lycian people left the flames of war behind and chose freedom .

The Lycian resisted lots of invasions but with their sense of liberty they created the first liberal constitution.

This is how Lycia became the first united republic in world history .

“Were I to give a model of excellent confederate republic, it would be that of Lycia .”

It is a unique example of a democratic republic structure that is formed with the conscienceness of independency, freedom and solidarity in the archaic age.

Today the Lycians system is one of the most important sources for the inspiration of the federal states structures in the world .

Based on all this , the first parliament building of the world was also built at the ancient seaport of Patara . 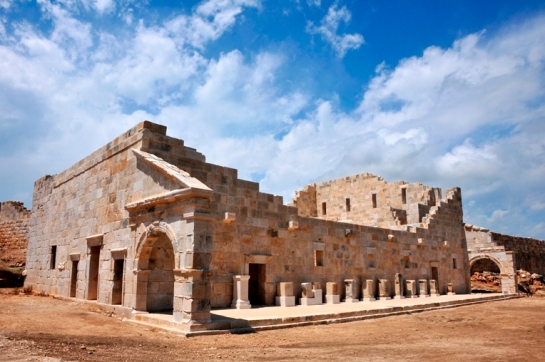 Thanks to the rich cedar forests in the area , the Lycian also built the best ships of their times.

The tales of Lycia never ended – Appollon , Zeus ,Leto , Artemis , Phoenix , Pegasus and many other mythologic characters were always part of these lands.

The life of St Nicholas and the Illiada of Homeros were also a part of reality and imagination in this region .

Lycia is a heritage to the entire humanity with its political forms , its customs , its specific language and inventions and is enlightening our modern ages by today .

Thousands of their cemeteries in the area are witnesses of time and have been hold in respect symbolizing infinity in this sense .

For this reason on one of our free days we take the opportunity to visit the ancient Lycian cities of Xhantos and Letoon which are just few kilometres away from Patara. 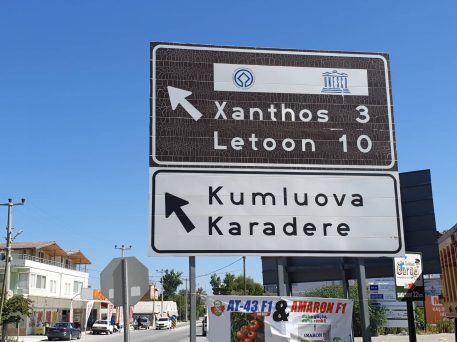 These 2 locations are hidden in the region between the little village of Kınık and the river of Esencay ( Xanthos River ).

As said you have the feeling that for the local farmers nothing has changed in all the centuries – they are just living door to door to these ancient cities very naturally.

First we arrive at Xanthos , the ancient city that is about 46 km east from Fethiye , close to the village of Kinik .It is dating back till 2000 BC where its name was Awarna and then Arnna when it was ruled by the Hittits and which became later the capital city and administrational center of the Lycian civilization in the arcaic aera. History is dating back to the 6th century BC when Xanthos was under attack of the Persians . With the help of Alexander the Great the city was rescued from the Persians in 330 BC . 167 BC the Roman Empire declares Xanthos as an independent state .

Xanthos consists of a an ampitheatre , the Lycian Acropolis, several agoras, a city center and a main street which is well preserved and about 12 m wide .

There are also portikos around and mosaics on the floor which are protected with tents and stones . 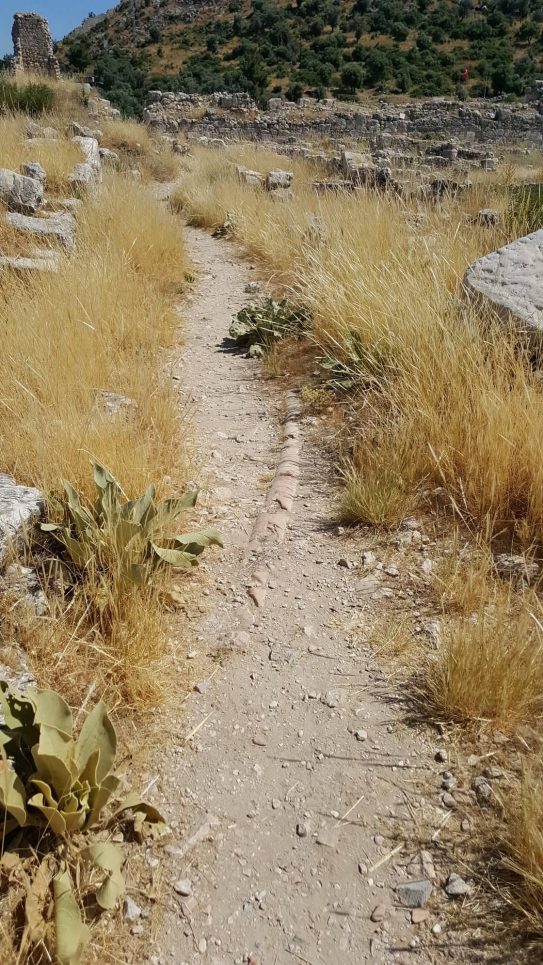 While walking around we also see ancient sewage ways around the parliament and the theatre which shows how civilized and architecturally developed these cultures were. 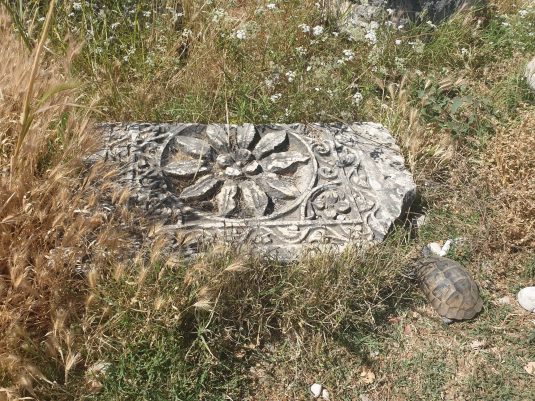 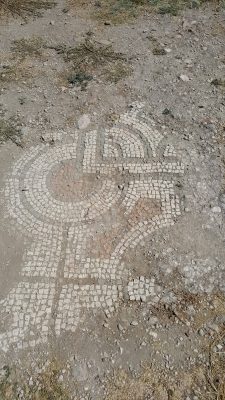 Very impressive and very unique are the rock-cut tombs , pillar tombs and pillar – sarcophages as examples of funerary architecture . 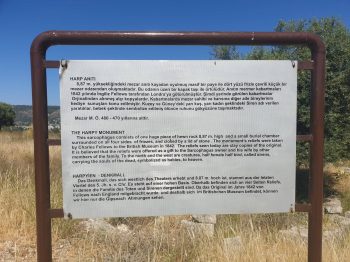 At the end of the city there is on the left hand side the Necropolis and on the right hand side a cathedral which was built after AD but was one of the first churches in Anatolia for Christianity .

In a distance of 4km there is the ancient city of Letoon . In the ancient times Letoon had a close connection to Xanthos and was the religious and spiritual center of Xanthos. When we arrive in Letoon first we see the old amphitheatre . 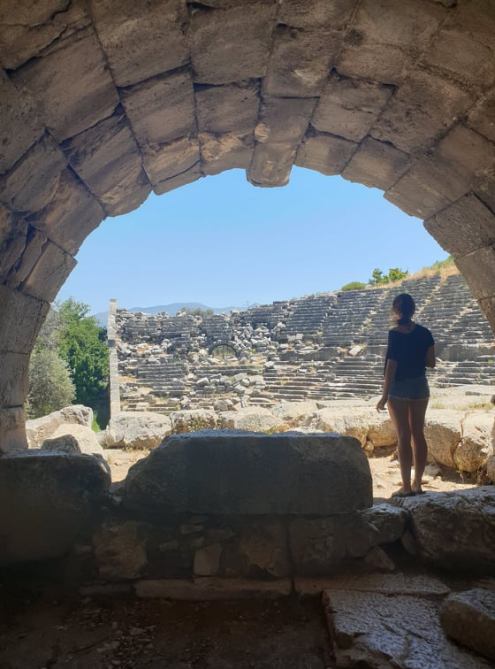 Through the ancient stones we sometimes spot frogs, reptiles and some other animals while we walk around.

While you walk downwards you arrive at the portikos , the nympherium of Hadrian with the holy water source which is today also under water and the 3 temples – the temple of Leto and her twins Appollon and Artemis. 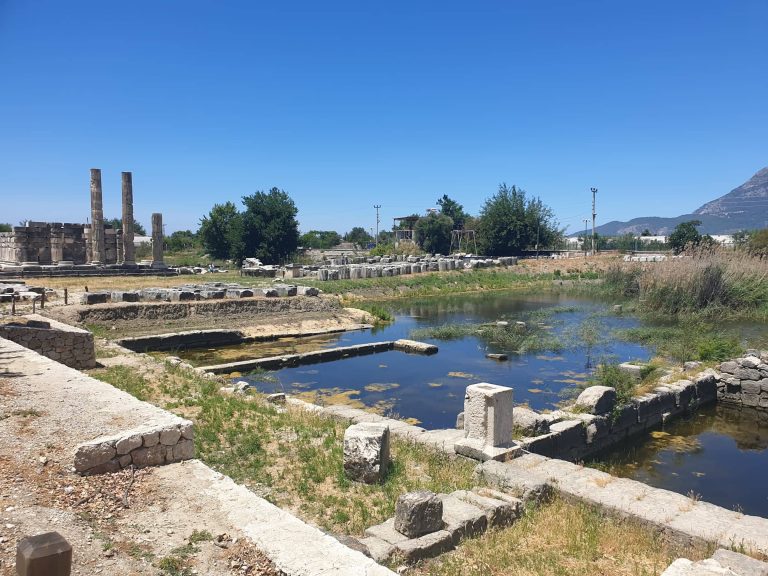 At its eastern side there is the Appollon temple with a very nice mosaic -2200 years old.This temple is slightly smaller then Letos – it is 27x 15 m .

The smallest of the 3 temples is the one dedicated to Artemis .It is in the middle of the two and has a size of 18 x 8 m. 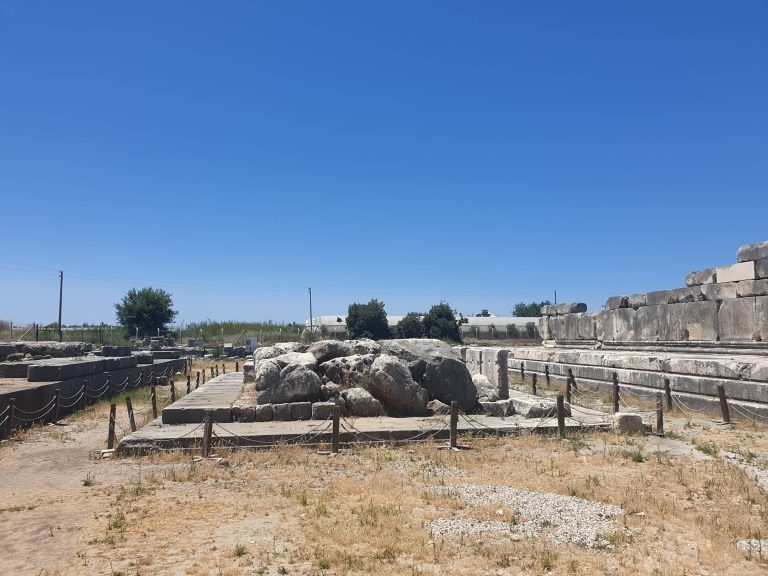 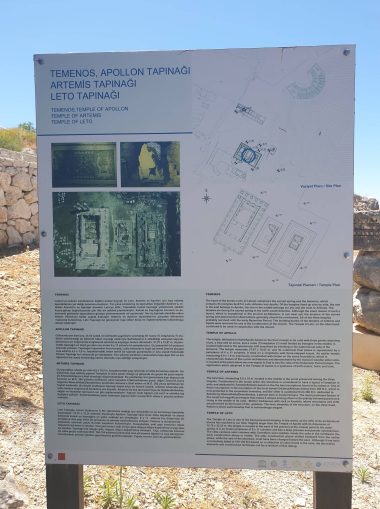 At the backside there are the ruins of a cathedral that was built in later times.

At the back side of the Appollon temple there is also a 3 lingual stone which contains scripts written in Lycian , Aramean and Greek language. 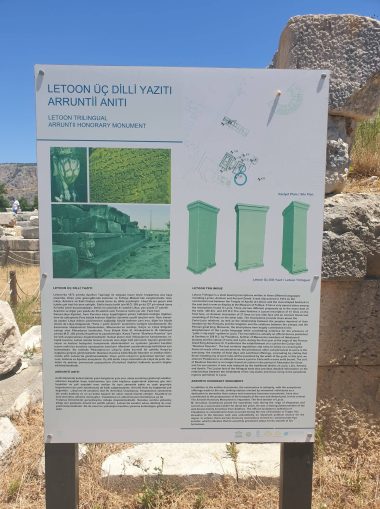 Since the water level began to raise in the ancient times a huge part of Letoon got under water as it is also today. Hadrian Fountain and the Holy Road is also situated here, at the back.

Letoon also became Unesco World Heritage in 1988. Xanthos and Letoon were two neighbouring settlements and belonging historically to each other.

Both ancient settlements are rising spectacularly in the natural landscape and being witness of history.

It was in the 19th century when the British came to the region and spent 2 months to collect and pack the most remarkable pieces of both ancient settlements and then to transport those with their ships to Britain.These are today presented in the British Museum. 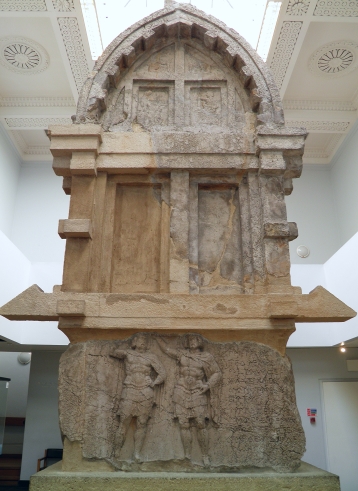 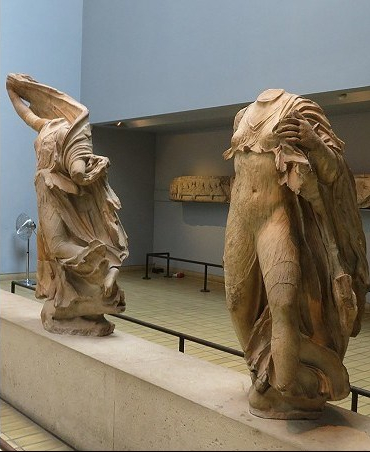 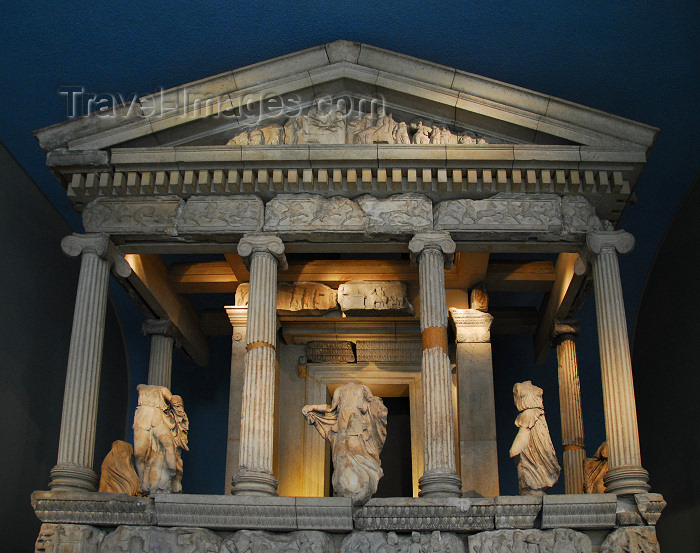 The Lycian (Xanthos ) room is one of the most popular and most visited rooms in the British Museum nowadays.

I am so happy that we spent the time in this area which is so impressive with its natural environment and history and to explore amazing Lycia as one of the most important civilizations in the Iron Age in Anatolia .