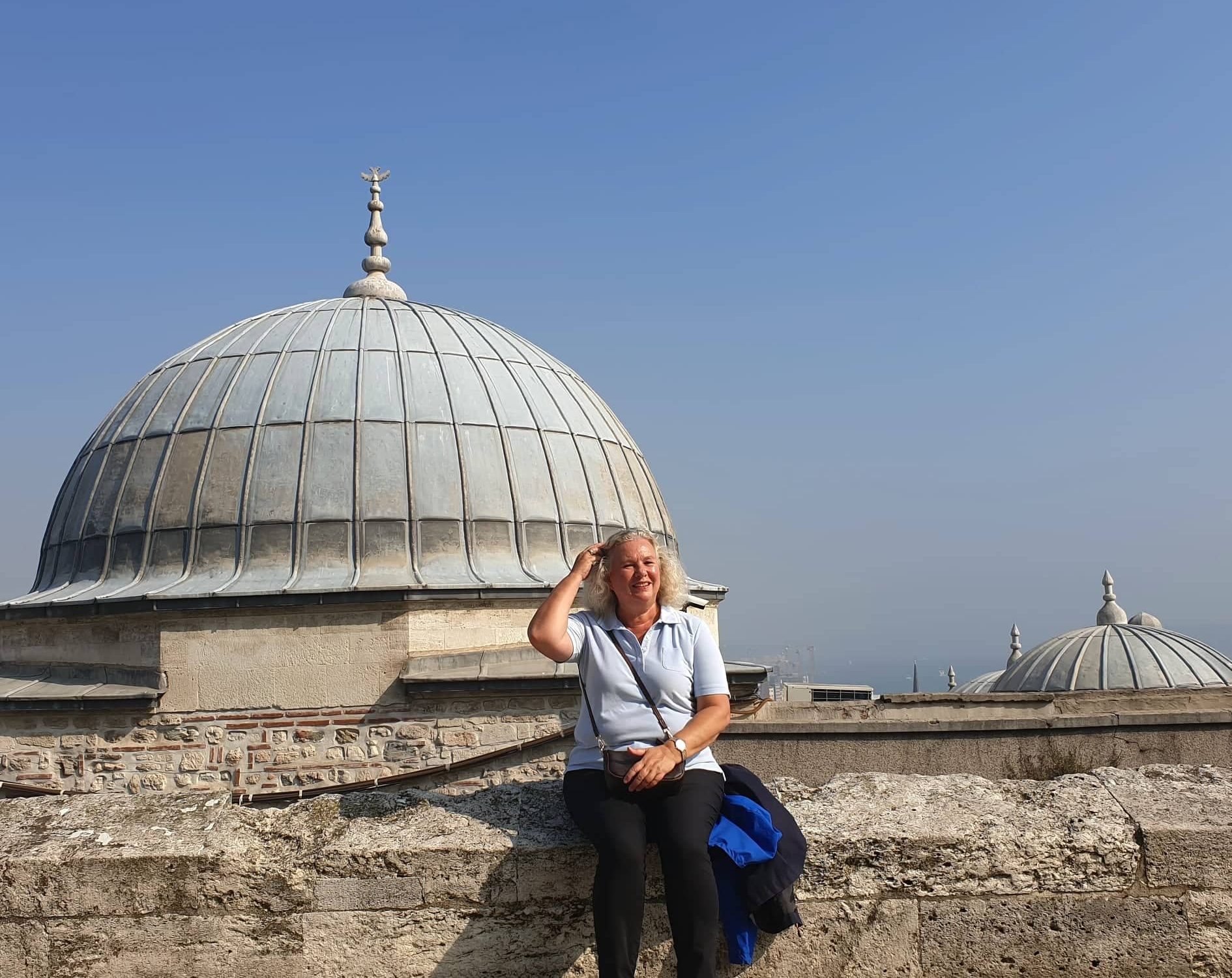 “It is never too late” and “Nothing is impossible ” are my thoughts of today’s blogpost which will be about the legendary Master Architect Sinan , his life and his superb master pieces in the Ottoman Empire – a genius who left great artwork behind.

It is about a man who was born in 1490 and who served for the Ottoman army, survived many wars and built his architectural masterpiece when he was 82 years old in a time where the lifetime expectation was very low .

We are talking about Sinan, who was born in Agirnas , a very small village in todays central Anatolian region ( Turkey ) close to Kayseri , son of a stone cutter in those days. It is a special geological and geographical area in Anatolia where you find lots of underground cities , caves where people were living for centuries.

Especially the Christians in those times were using these caves to hide against enemies – there are huge cities underground including monasteries , cathedrals , barns for animals like cows ,sheep, horses , water and food depots , places to grow birds, air conditioning systems , cemeteries – whole cities were hidden here .

In summer the caves were nicely cool while in winter times they were agreeable warm .

When in September 2019 we are passing by Agirnas , Kayseri , with a group of friends we are interested to have a look at the birthplace of architect Sinan.

It is a sleepy little ancient village with very narrow streets. There is nearly nobody living here since most of the people moved to bigger cities or even abroad .We just see some kids and few dogs strolling around. 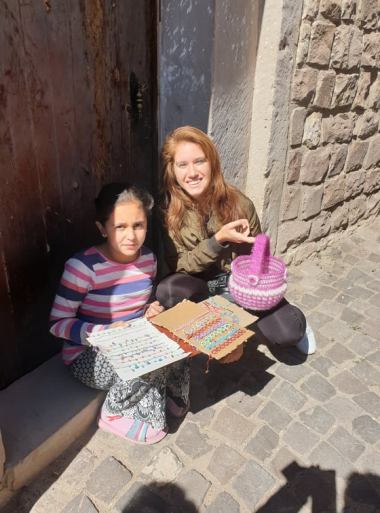 It is a village that witnessed ancient times and is today the base where Sinan grew up and was taught many abilities by the whole village people but especially by his father that he was going to make use of later on when becoming a builder of the Ottoman Empire. The outside of the house ,that he was probably born and grown up, looks like a villa with nice decorations and a beautiful balcony while

inside it is an intricate cave. 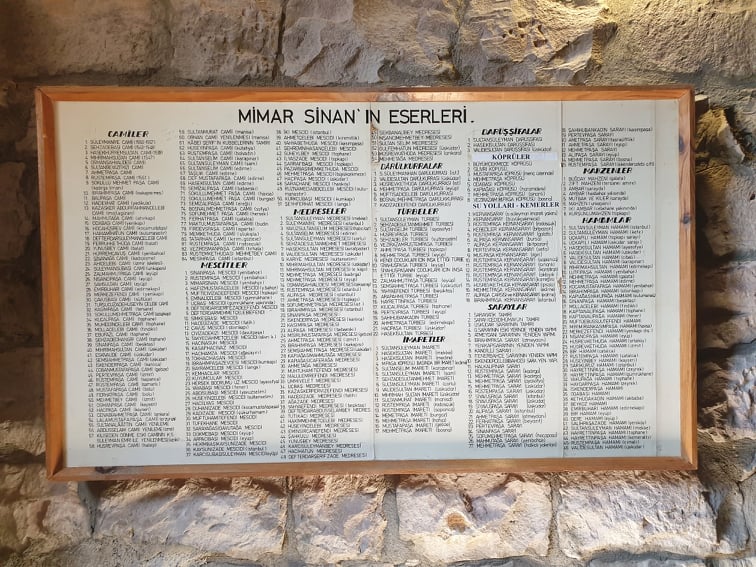 Mostly all of the buildings in Agirnas village here, including Sinan’s house and their neighbors’, are strengthened with arcs inside to stabilize the construction-arcs that we will find back when studying Sinan ‘s monuments later on . 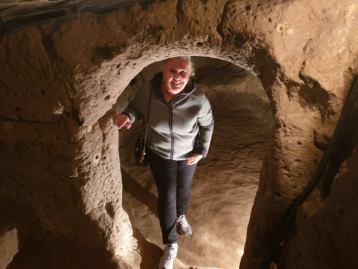 The village actually is a number of lots of small houses which are inside natural caves but having a lot of architectural tricks. For instance the windows are quite high as the higher the window the better the air that was blowing in or a place inside the room to wash your hands or your face where the water is just disappearing in the ground as it is made out of volcanic stone and no need to have a discharge for the water.

There is also a special seating place for the owner of the related house where he can observe and coordinate all at the same time ie the servants or the family members working in the kitchen as well as his visitors in the reception area .

When Sinan is 16 years old he becomes a carpenter at the Ottoman army in Istanbul and this is where the career of a world famous architect – of Master Sinan starts .

In the next decades he is part of the Ottoman army under Sultan Selim I and Suleyman I during their military campaigns and expeditions to Damascus , Cairo , Rhodes , Vienna , Balkan, Tebriz , Bagdad ,Corfu and many other locations where he has the opportunity to get insight into the variety of those different local architectural traditions. He begins to be very successful in the Ottoman forces as he is able to find great and fast solutions for the army . For instance he is able to build stone bridges to pass rivers for the army forces within a fortnight while other architects need months .

This is how the Ottoman army gets speed and power and this is the way on how Sinan gets the attention of Sadrazam Lutfu Pasa and then of Sultan Suleyman the Magnificent. During these decades until he became 50 years old he built many monuments.

Finally in 1539 he became the master architect of the Ottoman Palace under Sultan Suleyman I who gave him huge opportunities to grow his talent.

In total he built 477 buildings during his lifetime such as mosques , schools , bridges , palaces , summer pavilions , aqua ducts , hospitals , ancient baths ( Hamams ) , Mausoleums , Monasteries for the Derwisches ( Tekke ) , Carawansaries ,and Kitchens for the Poor ( Imaret ) where the major part is located in Istanbul and in the close surrounding of about 250 km around the city.

The prototype or model for his mosques was always the Hagia Sophia, a splendid monument in Istanbul built in the 5th century. It has a very impressive huge dome on top and is one of the most magnificent buildings in the world.

The Ottoman Sultans were more than generous to Sinan and gave him endless financial measures to build not single buildings but whole complexes of buildings .

Actually the Sehzadebasi Mosque is an early masterpiece of Sinan and counts as the turning point in the Ottoman architecture as it is the first building with the typical cascade of different domes ie a central dome , 4 columns and 4 semi-domes and some third domes. It is also called the first Master Sinan Mosque.

The second range of monuments which is very significant and outstanding for Sinan was the Suleymaniye Mosque ( 1550-1557 ) which became a part of the skyline of the city of Istanbul together with the Blue Mosque and the Topkapi Palace . The Suleymaniye Complex is well integrated into the hillside of old Istanbul facing the waters of the Golden Horn and looks like a crown with its 4 thin minarets overseeing the ancient city.

It was the first time that Bolus red color was used in the Iznik tiles at the walls of the mosque. The Suleymaniye complex today consists of a religious school , a kitchen for the poor , a library , a mosque , a hospital and a hamam. 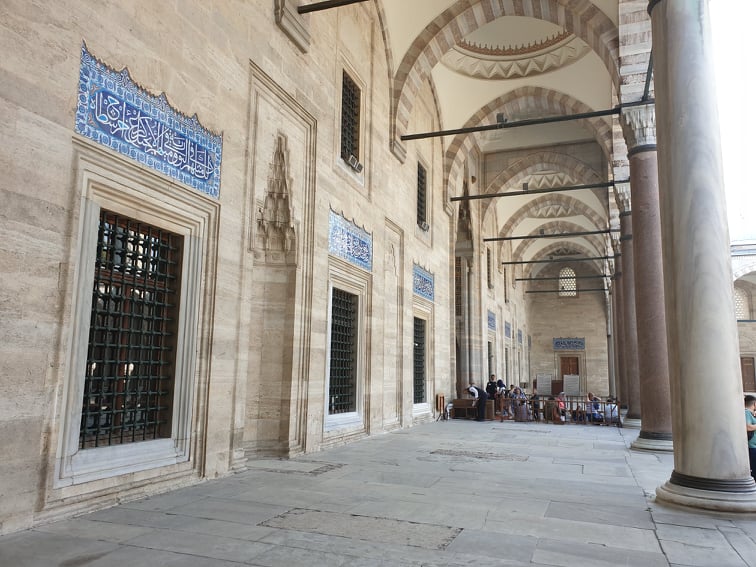 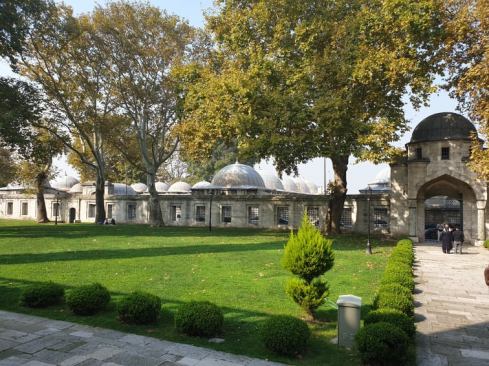 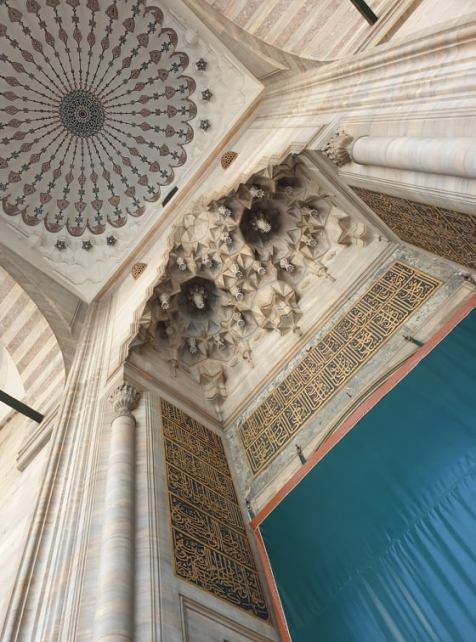 The interior of the buildings are as impressive as the exteriors. 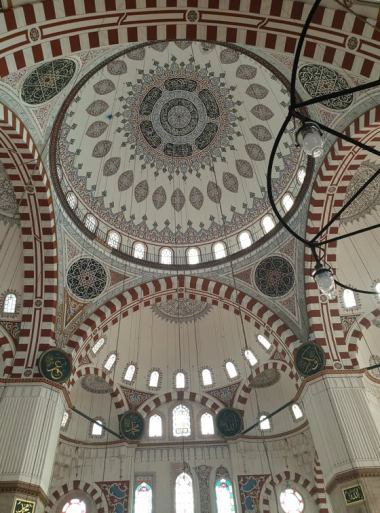 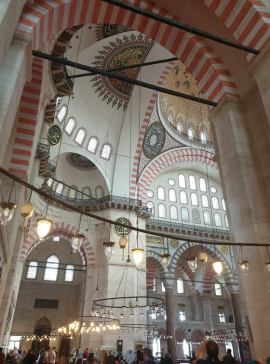 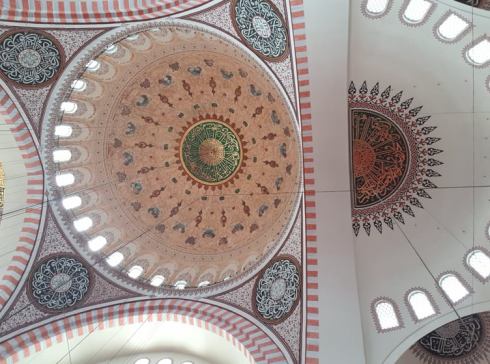 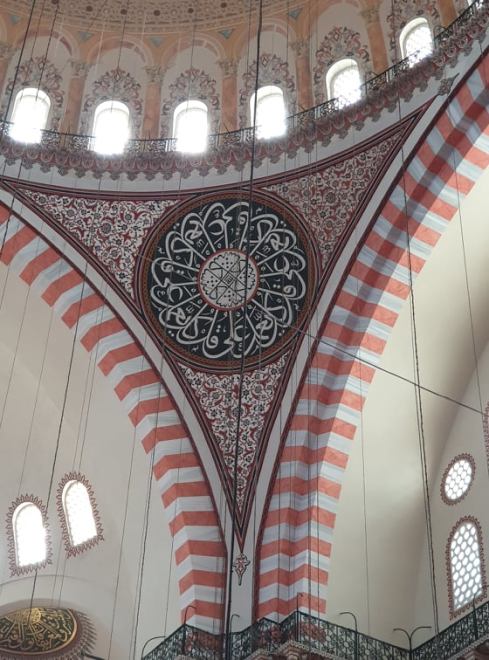 Camel skins at top of the mosque are supporting the acoustic system of the building.

Architect Sinan introduced ostrich eggs into mosques since he discovered that those eggs protect the building from spider webs and other bugs. Now these ostrich eggs can be seen in many mosques and churches in Turkey.

There is also a smoke room in the mosques of Sinan where the smoke of the oil lambs is gathered at the inner part of the domes and later used for ink purposes .

In his mosques you can somehow also state that certain pillars can be turned which is important for the flexibility of the mosque for earthquake cases .

The Suleymaniye Mosque actually is a tribute to Sultan Suleyman the Magnificent who was the longest reigning sultan in the Ottoman Empire ( 1520 -1566 ) and is a symbol of the sultan as well as to his architect.

The eternal resting places of Sultan Suleyman and his favorite wife Hurrem Sultan also called “Roxanna” are also here in the gardens of the Suleymaniye Mosque where they are buried in a mausoleum.

To understand the modesty of Sinans character, he himself designed his grave to be small and unnoticed. It is located outside the Suleymaniye Mosque at the corner. Most people who pass it by on this little street even do not recognize this place that is next to a little fountain . 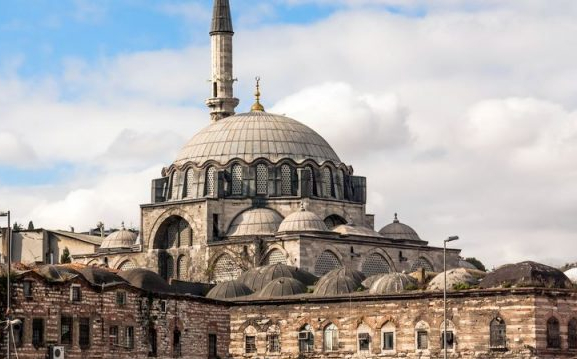 What is unique are the overwhelming beautiful Iznik tiles in the mosque which are a visual spectacle of brilliant colors and designs. 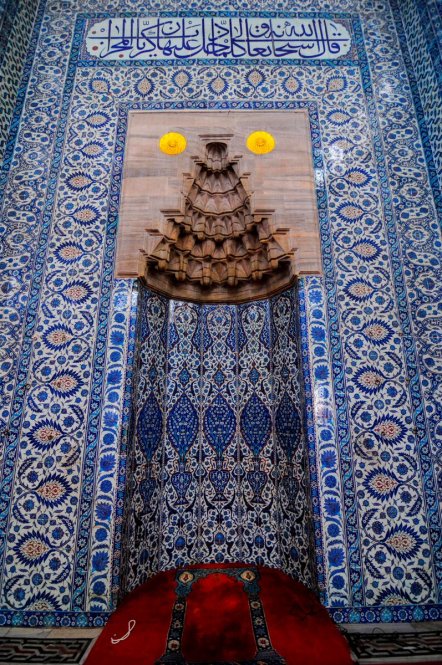 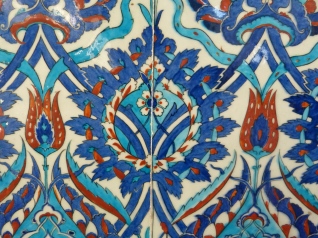 The master piece of Sinan that he finalized when he was 85 years old is the Selimiye Mosque in Edirne ( 1567 – 1575 ) ,one of the capital cities of the Ottoman Empire close to the Bulgarian borderline.

The Selimiye Mosque is called to be the masterpiece of his lifetime where he found the perfection of architecture in the mosque with its 8 pillars and a full range of semi-domes and a special complex supporting system of those which is worldwide unique on its own and where there is no similar construction in any other architectural tradition. 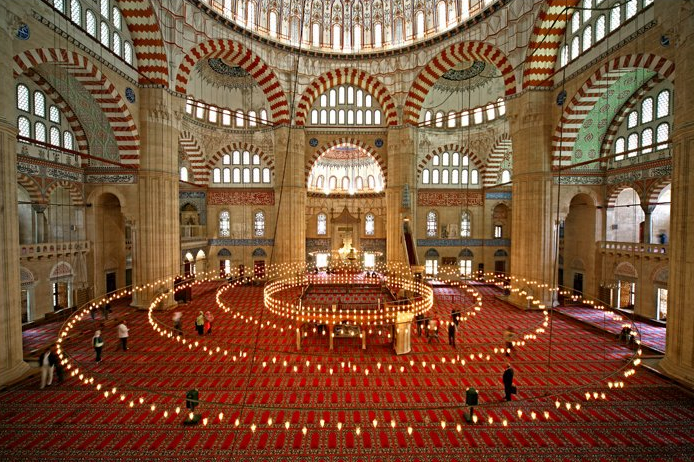 Besides all that Architect Sinan was also in charge of the restoration of the Dome of the Rock in Jerusalem , the Kaaba in Mekka and the Ancient Walls of Jerusalem .

His assistants were later building hundreds of other buildings where the influence and knowledge of Sinan could be seen such eg the Blue Mosque and parts of the Tac Mahal in India.

With Sinan the Islamic Art and Architecture reached its zenith in the Ottoman times .

Following the life story of Sinan in the ancient times , he started his real work at 50 until his death at 98 and left hundreds of magnificent monuments behind which are still admired worldwide hundreds of years after his death for its perfect techniques and beauty.