Any idea who Granma is ? You wont believe but it is the name of a boat .

Though it is not an ordinary boat – it is a very special one that I will tell its story of .

Granma was a leisure boat , built in 1943 in Mexico with a length of 18 m and which was designed for 12 people . Its name was dedicated to the grandmother of its owner in those days not knowing how historical this little thing will become . 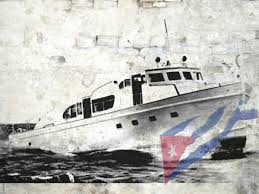 This fisherboat was then sold for 50.000 Mexican Pesos to Fidel Castro who was living in Mexico at that time and here their destiny started.

This was exactly the time when Fidel Castro decided to attack Fulgencio Batista and his regime that was reigning over Cuba in these days and to kick off his legendary revolution for Cuba .

It was on the 25th of November 1956 when Fidel Castro , together with his brother Rahul Castro and their compagnon Che Guevera accompanied by a huge group of their Cuban friends were leaving the harbour of Tuxpan , Vera Cruz in Mexico to start their mission .

All in all they were 82 people !!! on this boat instead of 12 and needed to cross a part of the Atlantic and the Carribean Sea, bridging a distance of 1590km on sea .

With a bad equipment on boat and with the weight of the people the boat had huge problems to move forward . The connection of their radio was bad so that they could not communicate with their allies on Cuba Island . On top, the boat was overloaded with weapons and cans with 2000 gallons of fuel which were stored on the deck .

It was 01.00am in the morning when they started their journey with only one engine working to depart quietly and with no lights on in the night sitting nearly upon each other .There was just little food on boat for them .The city was sleeping when they left the quai . It took them an hour to drive through the river and cross the harbour to arrive at the gulf . Nobody had noticed them leaving .

It took them 7 days to do the journey under very difficult circumstances.

On the last day of the journey all of a sudden one of the crew fell overboard and for the first time during this trip , Granma’ s lights were switched on – at a timespot that was the most dangerous .With Fidel’s and his comrades’ efforts the person was found in the deep dark and rescued .

The initial plan was to follow the route of Jose Marti who kicked of the War of Cuba for Indepence in 1895 already . The planned landing spot was a little town called Niquero in Oriente province . But timewise Granma was far behind the plan .Fidels allies , one of them Celia Sanchez – one of the founders of the 26 July Movement -were still waiting with food , weapons and all their equipment for Fidel and his comrades on the 2nd of December at Niquero .

The journey was more than difficult for the 82 rebels and it was like a miracle that granma did not sink and that the crew survived under these dramatic circumstances .

It was 15 miles before they arrived at the original landing spot when Granma was detected by a helicopter on the 2nd of December 1956 at Playa dos Colorados close to the village of Las Coloradas .

The bay was a kind of swamp , a mangrove so that it was very difficult for the men to leave the boat safely and to manage their weapons due to the muddy underground. They found themselves in a battle with Batistas groups and tried to escape through the mangrove .

Out of 82 people who disembarked at this bay only 12 survived .They flew through the mangroves for several days , were given food and water by some farmers living in the region and escaped to the Sierra Maestra Mountains ,

Here they re-grouped with their allies and finally started their revolution with 300 people against the 10.000s of soldiers of the Batista regime .

The disembarkment of the Granma was actually the beginning of the revolution in Cuba and the kick off for the change of the history in Cuba.

It is in 2015 when we do a cultural expedition to Cuba Island being so excited about the history and the nature that the island will show us .We know that it is the end of a period since Fidel Castro who is still reigning over the country is now 89 years old and ill. His brother Rahul is representing him for official events. For sure life will change on the island and westernized when Fidel Castro will pass away and a new era will start .

We start our journey in Havanna and move to Santa Clara . 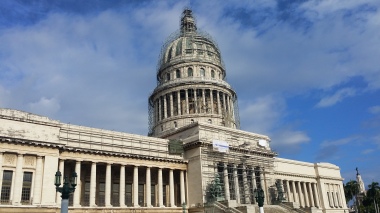 In Santa Clara we visit the Mausoleum dedicated to Che Guevera . 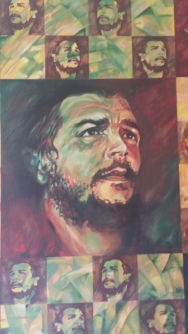 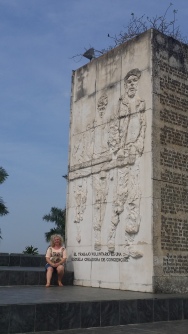 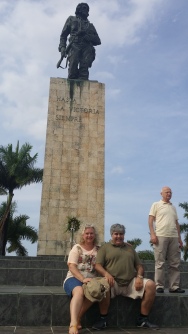 From Santa Clara we travel to Cienfuegos and then to Trinidad which is a beautiful 500 year old city on Cuba Island. From Trinidad we leave for Baiamo, then via Niquero to Granma province to visit the National Park of the Disembarkment of Granma . 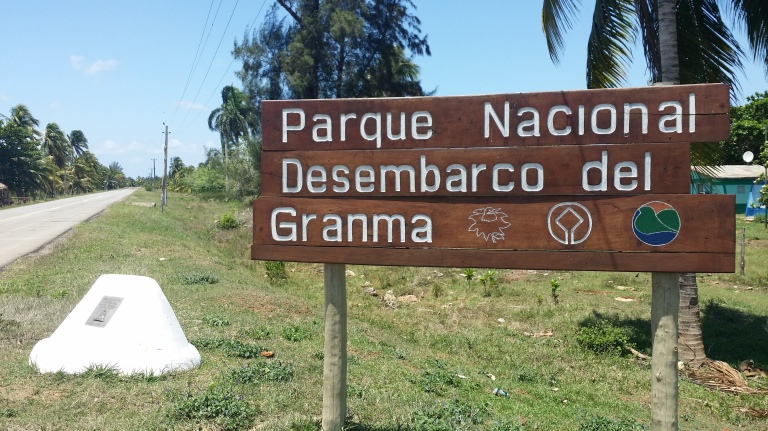 This national park which covers the bay where Fidel Castro and his comrades arrived with his boat Granma is a place with a special energy .

It is very quiet here. Nature is beautiful around but somehow you feel that there is some heavy emotion in the air -somehow there is some sadness. 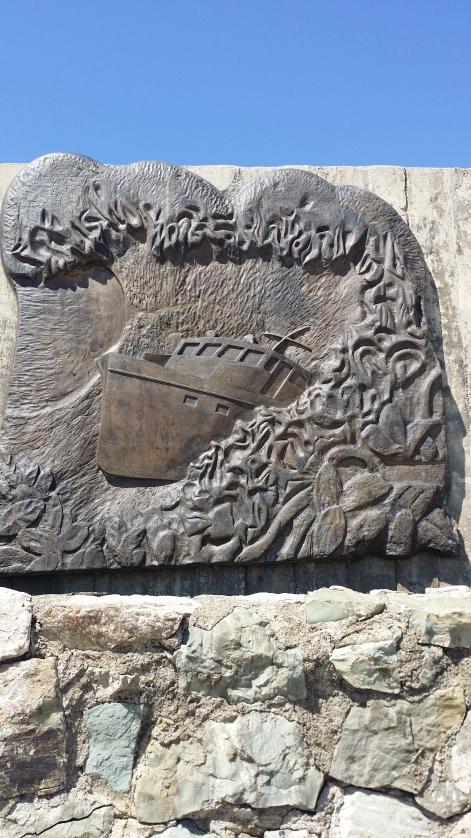 There is a long walkway through the mangroves which leads to the location where Granma needed to disembark in those days and was attacked by the Batista groups. 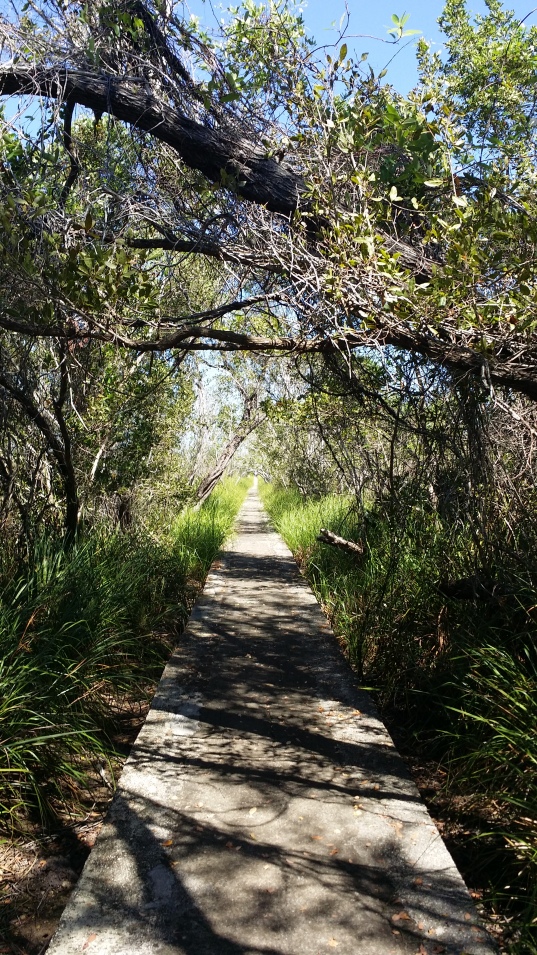 The walkway is very long and it takes us maybe an hour to get to the bay .

While we walk down to the old quai at the Playa dos Colorados I have the history of Granma in my mind .

The mangroves are very tight and low and there is no space below them to hide. There is also quite some humidity in the air .

When you see the mangroves you wonder how they could pass them in those days – it took them 5 days to hide and to get through the mangroves until they arrived at the next village. 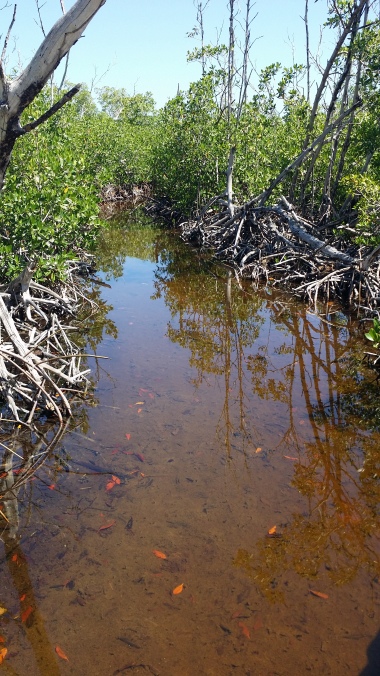 Finally we arrive at the location where Granma landed and where today there is a kind of little destructed quai .

It is very impressive to be at this historical place and just to imagine the events that took place in 1956 when these men arrived at this front – what a frightening journey they experienced and what a dangerous challenge they had ahead .

After a while we walk back again and arrive inside the park where there is the hut of the farmers’ family who gave some food , water and housing to Fidel Castro and his remaining 11 friends after having spent several days in the swamp out there . 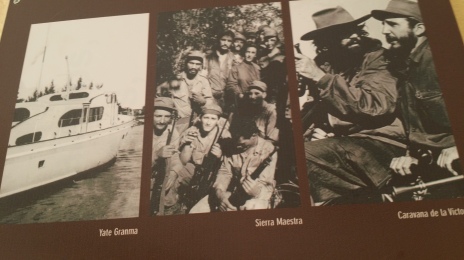 For me it is awesome to have the opportunity to be at this place personally , a location which is a part of World History – a very unique experience and moment .

When we leave the national park and continue our way to Santiago we listen to our guide who is telling us about the days the rebels spent later on in the mountains and how they continued their fight against the existing regime. 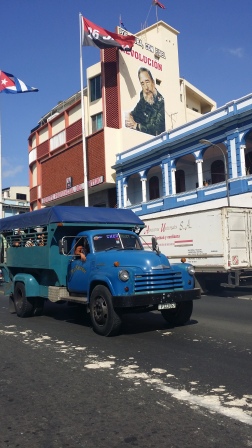 During all the days that we drive through the whole island at each and every corner you can see traces of the revolution and their rebels – pictures or monuments of Fidel Castro , Rahul Castro , Che Guevera, Jose Marti and so many others who were part of the revolution , historical buildings which remind of political events of those times. 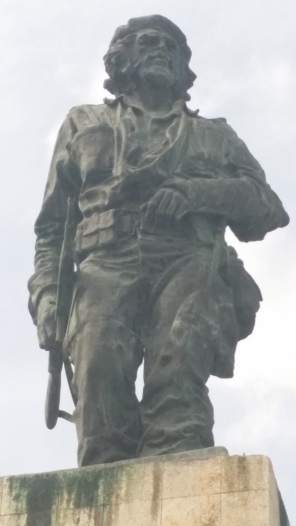 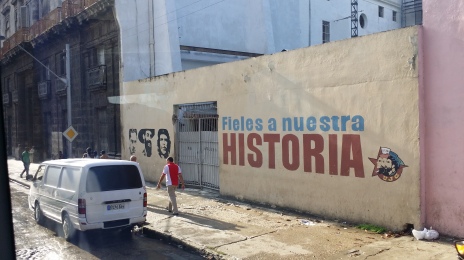 Cuba and its people are very much unique – it is difficult to compare them with any other nation or country .

It is a poor country that started to change – I believe we are the last ones to witness the end of Fidel Castros regime . The island has a great flair and is very beautiful . 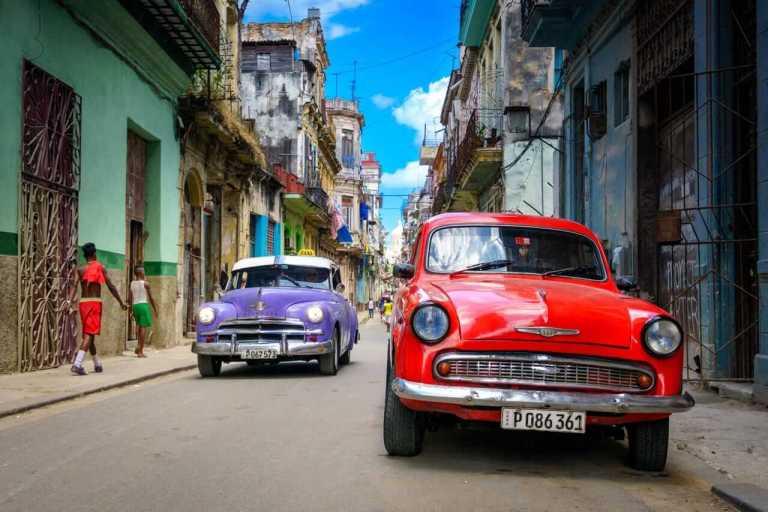 The oldtimer cars are awesome !

The smell of its sun, its flowers and its salty air is also very specific in my mind .

During our last day of our trip we also have the opportunity to witness the celebration of the 1st of May which is a national Day in Cuba . 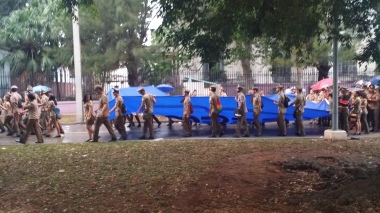 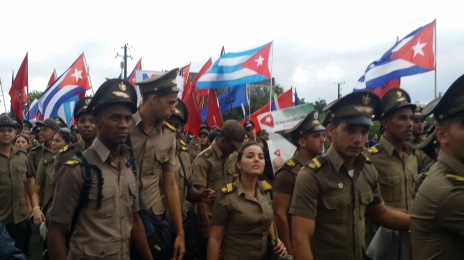 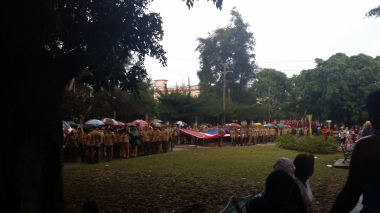 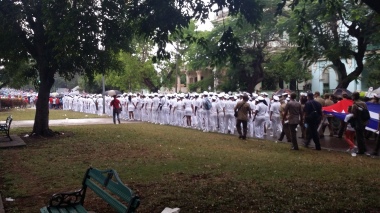 It is early in the morning when the walk of the people starts in Havanna and also this event might be a very special one that we will remember in future .

As said due to his illness Fidel Castro is not able to join the national celebrations but his brother Rahul takes his seat on top of the place of the Revolution, as a guest next to him Maduro , President of Venezuela in 2015 , is joining him .

The people are celebrating the day of the revolution and the Day of the 1st of May .

They are very disciplined but cheerful .The walk ends at noon time and the crowd is leaving the place .

In the afternoon while we walk through the streets of Havanna we pass by the Museum of the Revolution where the original vessel of Granma is now located next to the Granma memorial . 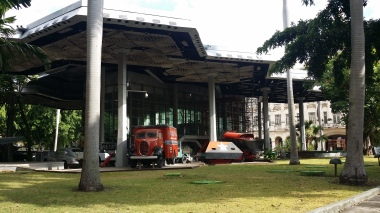 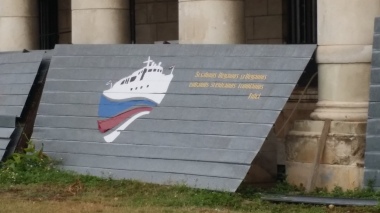 It is encased by glass and people can walk around it .

The boat has given its name to the province at the Playa of Colorados bay and the national park became a UNESCO World Heritage since 1999 due to its specific natural beauties , to its endemic species of plants and animals in this region of Cuba Island and the historical background of the Bay.
Granma became also the name of the official newspaper of Cuba’s Comunist Party from its very first day onwards.

We will see how Cuba will change while the World is also changing but it is an immense story that the rebels of those days left behind as a trace on World History .

One thought on “The Story of Fidel Castro and Granma, Cuba”