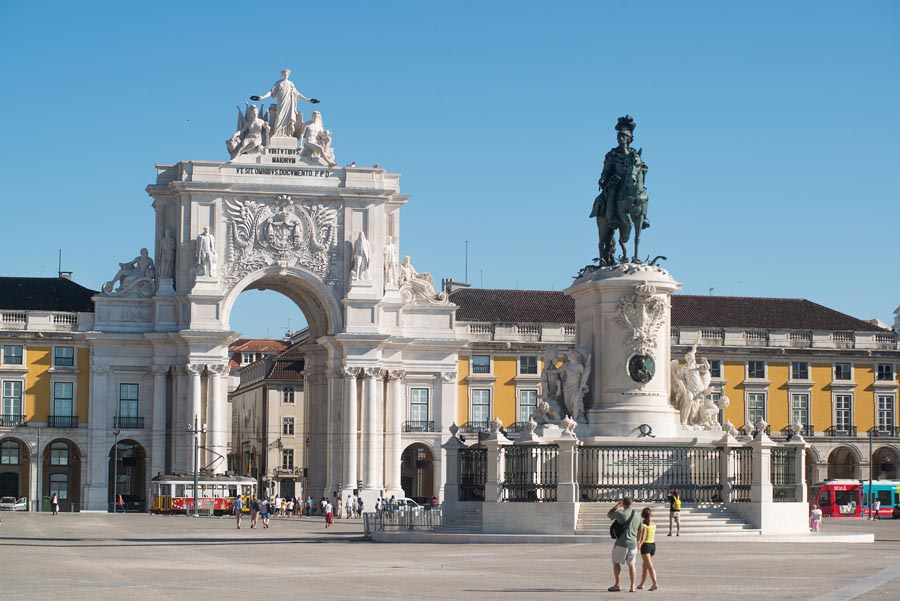 Whenever I think of beautiful Lisbon, the first thing that comes into my mind is the explorers’ monument (Padrao Dos Descobrimentos) at the Tejo ( Tagus ) river side .

The monument is about 52 m high and was built on the 50th anniversary of the death of Henry the navigator . There are in total 33 figures on the monument , whom are people of historical value from the period of Portuguese Age of Discovery .

Among the 33 statues are following personalities :

Ferdinand Magellan , first sea explorer to travel around the world

Bartolomeu Dias ,First sea explorer to sail around the Cape of Good Hope

Ferdinand the Holy Prince ,Son of King John I of Portugal

This monument has always impressed me as from this point, the Portuguese sailor Vasco de Gama, one of the most successful explorers of Europe, who lived in the Age of discoveries, set out in 1497 to discover India by sea.

After a short while, Pedro Alvares Cabral sailed from the same point in 1499 and after a long cruise arrived in Brazil, the South American continent.

This region therefore affects me a lot.

Both events have led to great changes in world history. Vasco de Gama first conquered many port cities in Africa and then in the Asian region and became the ruler of the Spice trade , which were coming via the sea routes. Some regions in North Africa, India, Indonesia, China and Japan have thus become a Portuguese colony for many years. These commercial sea routes were controlled by Portugal in those days.
With the arrival of Cabral in Brazil, the fate of the local people in Brazil also completely changed. Brazil also became a Portuguese colony and even the Portuguese king settled in Brazil for a while. The silver and gold mines obtained on the continent have enriched both Portuguese and Spanish kings.

The monument is right by the Tejo river, and the 33 figures on it, which have played an important role in Portuguese history, face the river and symbolically the open sea , symbolizing the dominance of Portugal in the seas of the world for a period.
Today, Portugal has become a small but cute country in Europe’s westernmost edge on the edge of the Atlantic Ocean and day by day, especially the capital Lisbon and its surroundings, have started to attract more and more international tourists.
You can feel its history, seafarer identity and experiences everywhere in this very old city, which is built on seven hills like Istanbul. There is the melancholy of the sailors in the local fado music, the memories of the women who waved their hands from their old colorfully painted houses to their husbands and lovers when those were leaving for their next seajourney. The reason why these houses were colorful is that sailors leaving and returning from the expedition can recognize and maybe their wifes on their homes’ balconies from far.

In Lisbon, somehow there is both , sadness and self-confidence and a defiant stance from the old reign in the air . That’s why Lisbon has a different spirit and character compared to other big European cities. The people are very friendly.

The yellow trams unique to Lisbon take tourists from one end of the city to the other . We go up and down the slopes of the city and visit those colorful shops, art galleries, bars and restaurants in all districts.

Especially the stones on the patterned cobblestone-type floor and the typical historical Portuguese tiles in the buildings add an extraordinary and distinctive beauty to the city.

One of the most enjoyable activities in Lisbon is to taste good snacks. First of all, that fresh and warm “Pasteis de Nata” dessert, which is very famous in Belem pastry house, should be eaten and drunk with a dark, sugar-free and delicious local coffee. Those who wish can add some sugar or cinnamon to this traditional Portuguese pie .

The Belem pastry house has been in service since 1837 and approximately twenty-five to thirty thousand pieces of this dessert are sold daily. The origin of the dessert actually goes back to the Jeronimos monastery, which is very close to the pastry house.
In the 19th century, monks in the monastery invented this dessert to generate income at a time when the monasteries were closed, and the dessert soon became very popular and famous. Since then, the “secret recipe” of the dessert has not been shared and the dessert has gained a great reputation in the world with its original taste in this pastry shop.
Other famous desserts of Portugal, ” Pao de Lo ”, ” Queijada ” (from the Sintra region), ” Ovos moles ”, ” Aletria ” and ” Rabanadas ” (especially during the Christmas period) are also very popular and delicious.
Other delicious food that needs to be tasted are ” Prego ” (Lisbon-specific beef sandwich sandwich), ” Bacalhau ” (salted fish), ” Pasteis de Bacalhau ” (Fish meatballs), ” Sardinhas ” (grilled sardine), ” Caldo verde ” (green soup), ” Azeitao cheese, ” ” Piri piri chicken ” (grilled chicken with special sauce) and are among the special tastes of Lisbon.

Sardines are also sold in cute colorful cans and they taste very good.
Octopus, shrimp, mussels, lobster and all kinds of ocean fish and seafood are abundant and very fresh.

I am just looking forward for the time when the pandemic is over and people are again allowed to travel .How great it would be to have a Belem pastry with coffee or a nice seafood in beautiful Lisbon and to stroll around up and down the streets in the city .