What a joy – this time we fly to Kars , to the most north-eastern part of Turkey .

It is wintertime and very cold . We have – 15 degrees and this time the flight to Kars is a pleasure as we fly over the white high mountains. It is a sunny day and we land at Kars Airport at a height of 1800 m.

It is a small airport , the sky is wonderful blue , the white of the snow , the clouds and the blue of the sky are matching so well. The air is crystal clear. The light wind is sharp but you breathe an excellent air.

I think it is the highest airport I ever have used so far .

Kars is a very unique place here in the mountains of Turkey , 55 kms from the Armenian border close to the famous and majestic Agri ( Ararat )  Mountain  with a height of more then 5000 m.

We leave our belongings to our hotel which is close by in the city , about 5 km to the airport . In the city itself we can see the castle of Kars where the Turkish flag is waving in the wind.Then we take our bus to the Ani Ruins .

We drive through an unbelievable nice nature. Pure mountain ranges and snowy fields allover in white. There is nearly nobody around , no cities – just very little villages here and there. Since it is quite cold , there is nobody on the roads. We are so lucky to have a clear weather – the sun is shining and the white of the fields and mountains is shining in the sun.

It is about minus 10-15 degrees but maybe as we are so joyful and happy we don’t feel the cold.

The rivers and lakes around us are frozen. 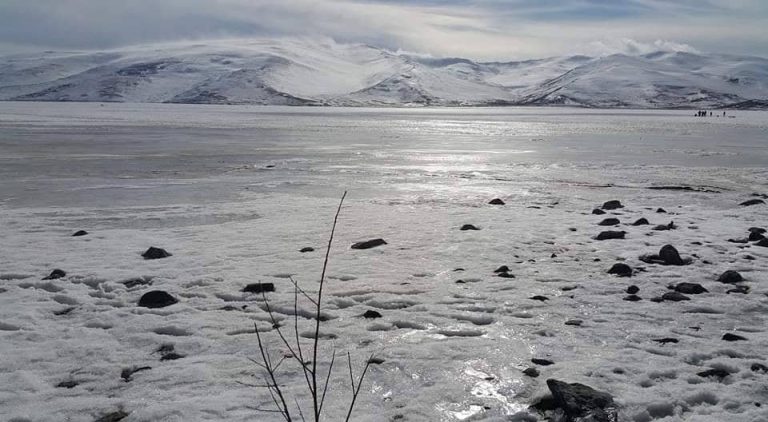 After a drive of 42 km southeast from Kars we arrive at the historical site of the Ani Ruins which belong to the village of Ocakli.

When we arrive at the gate of Ani I recognize that I did not expect such a huge and empty area to explore one of the once -greatest metropolis of the ancient times .

Ani is located on a plateau and for this reason it was always a good place to settle down and to defend the place. It was on the way of the Silk Road , actually the first station after the Caucasus mountains when arriving from the East . It is a place where since centuries lots of different cultures and civilizations passed by.

The oldest settlement goes back to the bronze age , later in the 10th century it was the capital of the Pakraduni Kingdom and became a walled city with about 100.000 residents in the 11 th century and then got under Armenian , Byzantine and then under Seljukian influence . Byzantine emperors , Ottoman Turks , Armenians , Nomadic Kurds ,Russians again and again attacked and conquered the city .In the 1300 s the city began to decline and was totally abandoned in the 1700 s.It was rediscovered in the 19th century but then closed off after  WWI and became an empty no man military zone . The ruins were left to their own destiny , to Mother Nature and some vandals in the region.

Today Ani is located directly at the Armenian borderline which is the  Arpacay ( Akhurian )  river that can be seen from the ruins.

Since Ani was very long time under the influence of Armenian and Byzantine culture , there were many churches and chapelles built in this area. 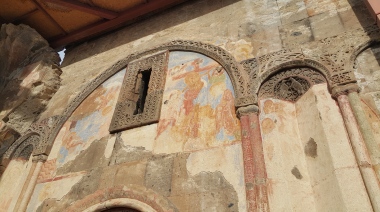 It was also home to the Seljukian Palace Door , Armenaprgic church, Ani Cathedral  ( 989 AD  ) , the Hripsimian Virgins Monastery ( 1000-1200 AD ) ,the Mausoleum of the Child Princes ( 1050 AD ) , the Church of Saint Gregory of Tigran Honents ( 1005 AD ) , the Church of the Holy Redeemer, the Merchants Palace  , the Virgins Castle ,the medieval Walls of Ani to name some of the famous buildings .

A special building on this ground is also the Menucher Mosque ( 1072 AD ) made out of red and black tuff stones , it is the eldest Seljukian building on earth.

When the Seljukian conquered Ani , the mosque was built by Ebul Mencuher bey and became the first Turkish mosque in Anatolia .It is elder then the famous Sivas Divrigi Ulu Mosque and the Diyarbakir Ulu Mosque.

The minaret has 99 steps as a symbol for the 99 different names of Allah and inside the mosque at the roof you will recognize the Seljukian star motifs and the word “Bismillah ” outside the mosque.

In the past decade it became easier to get access to this historical site of Ani and more and more people began to pay a visit to this place  . 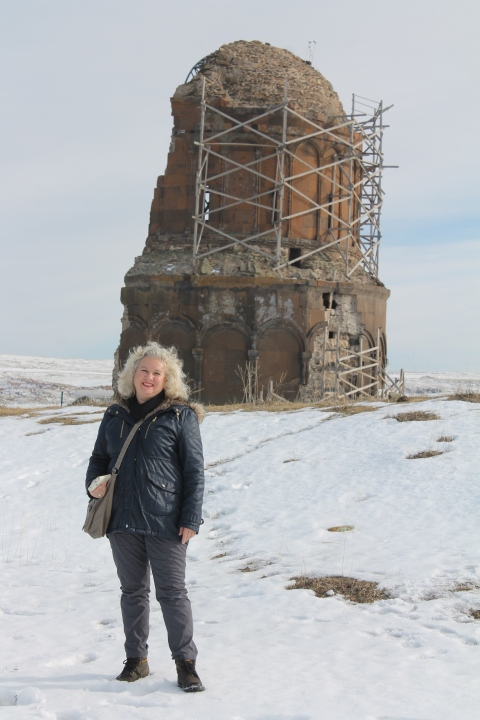 In 2016 the Ani Ruins became a UNESCO World Heritage Site. 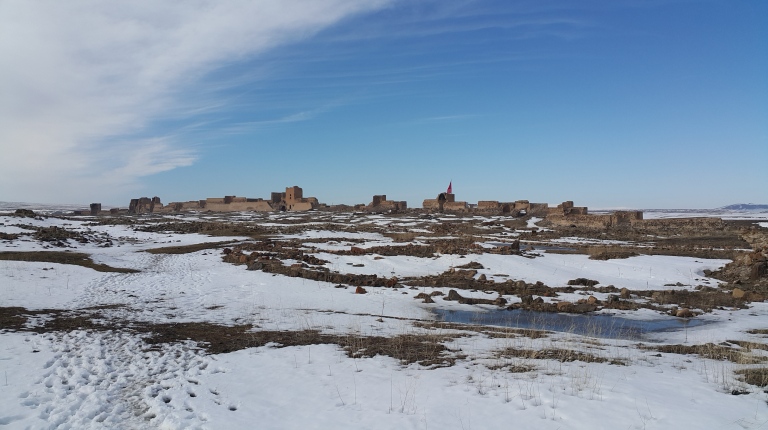 When we leave the site we are deeply impressed – we walked hours and hours on the ice on this historical location , admired the remains of the ancient buildings , admired the nature around – Mother Nature was on our side this day as though it was a very cold and icy winter day we succeeded to walk there for hours under the sunshine.

After we leave the Ani ruins we drive to the frozen Cildir Lake which is also not too far away .The ice on the lake is so thick that you can have some horse slides over there but here it is really windy and so cooold !

Nevertheless you need to be careful when walking on the frozen lake as in some parts of it the ice can be getting thin and can be also broken. 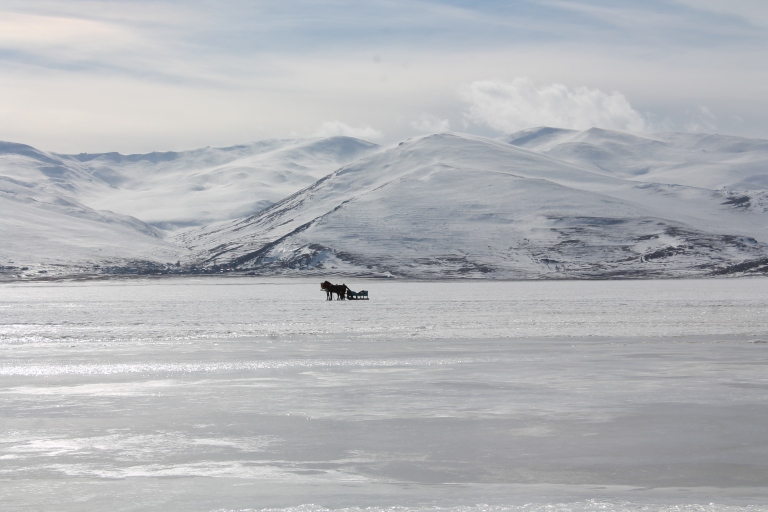 We enjoy the mountains, the sun light on the ice – the views are so picturesque and gorgeous ! 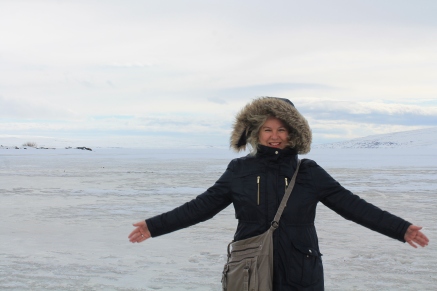 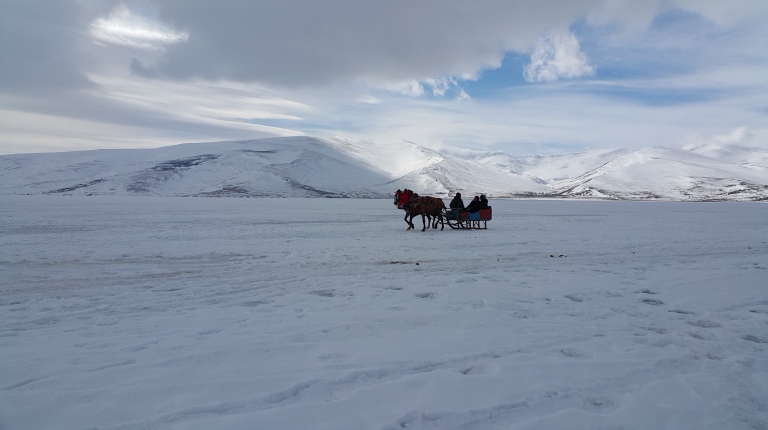 The horse slides are so colorful and nicely decorated and the slide drivers are so joyful on this cold day  as there are many visitors . They loudly sing their traditional songs. 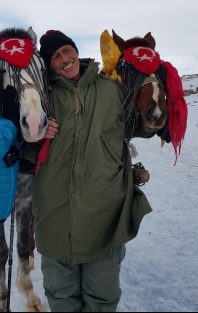 Moreover there are the fishermen who are doing ice fishing on the lake. They just open a hole and put their hooks into the cold water and are happy when they got some fish . 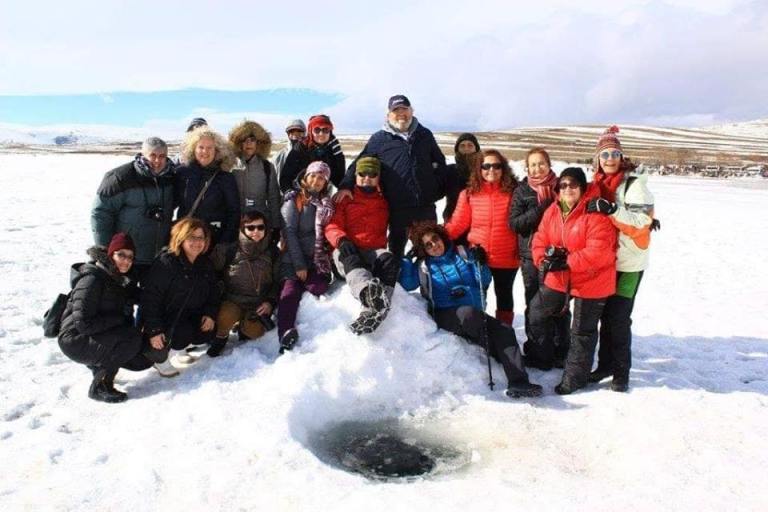 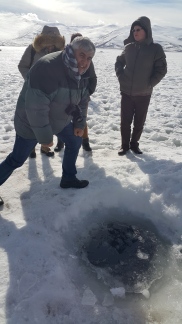 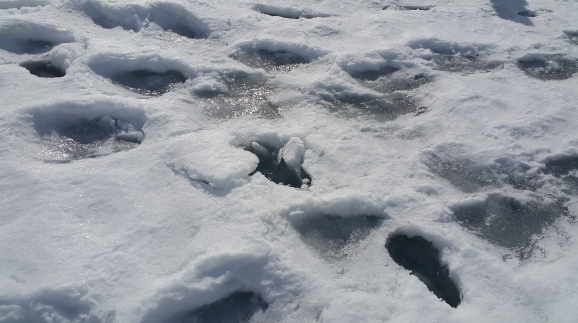 It is a fortune that our fish is already baked in the oven -our salad and our warm drinks are ready.

Kars is also famous for its cheese, especially the graviere cheese, brought to the region from Switzerland in the 19th century since the natural habitat around the mountains of Kars are very similar to the Swiss Alps.

After a long day in the cold , it is so great to be in that warm hut with friends and enjoy the day and have a talk about the impressions of the day before we drive back to Kars.

The sun is going down, it is half dark and we see gooses and  we can observe the shadows of the little greige foxes on the snowy white fields looking for some food.

Kars and Ani are always worth a visit – especailly also in spring or summer times it should be outstanding since the flora is unique at this place .

3 thoughts on “White Kars and the Ruins of Ani, February 2016 Turkey”