When visiting beautiful South America and its capital of Buenos Aires we certainly also want to visit its famous district of La Boca.

It is a sunny beautiful Sunday, just before the carnaval starts.

The city is beautiful green with its huge parks and big trees around with very wide and well structured avenues and boulevards . Buenos Aires together with Rio de Janeiro are the Nr 1 greenest Capitals in the World with a great diverse flora .It is really enjoyable to walk around.

We pass by the antique market of San Telmo -so many things to see and to explore. 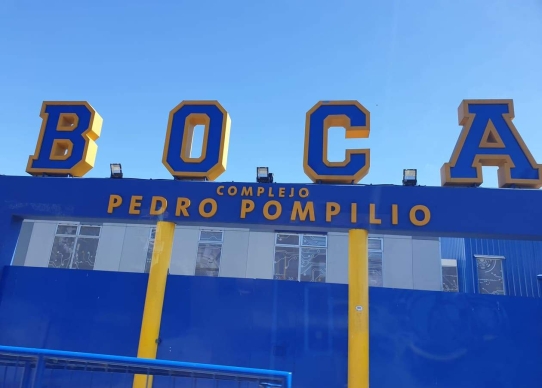 On our way we then pass by the Stadium of the Soccer Team of La Boca Juniors which has the colors of yellow and blue and which is in direct competition with the soccer team of Rio de La Plata, River Plate. 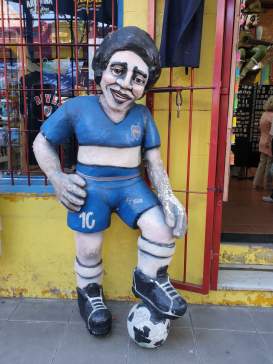 We arrive with our little bus and descend – colorful faces from the facades of the surrounding yellow, blue, green and red houses are welcoming us. We are in mid of the barrio La Boca in Buenos Aires.

Actually La Boca is a very picturesque part of  Buenos Aires which was the gate for its early immigrants who began to settle down in the 1830s and the incoming settlers were mostly people from Genoa, Italy.

Since these people were used to the seaside of the Italian coastline they were happy to settle down at the coastline of Buenos Aires and gave the region its character. 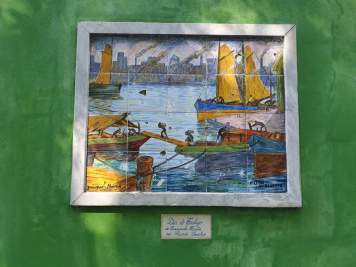 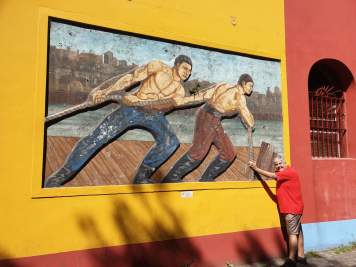 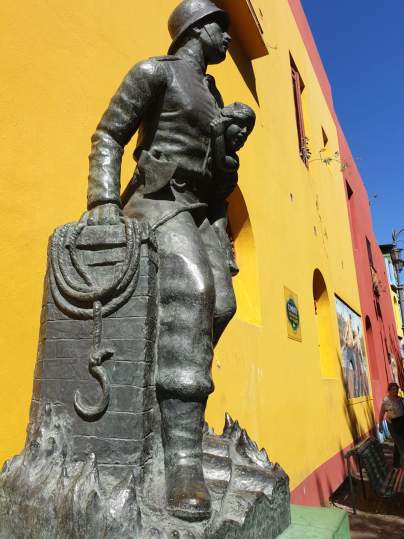 The name ” La Boca ” means “the mouth ” and derives from the Mantanza River or Riachuelo as it is called over here due to its location. The port is a place where boats from abroad also arrived and it is said that in 1536 this part of the coastline was a point among the first where the Spanish boats landed.

Another explanation is that “La Boca” derives from the Italian name of “Boccadasse” , a close neighborhood of Genoa due to the citizens with Genoese origin and culture. 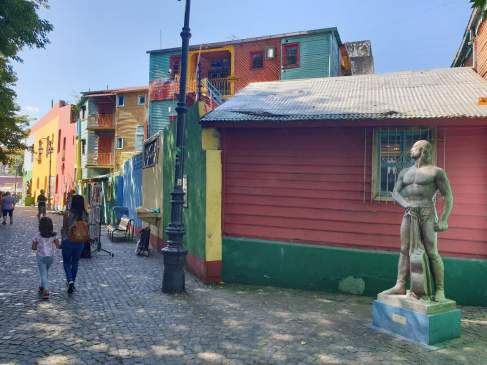 The immigrants who arrived in this area were very poor and there was no other material than some used leftover metal tenements from the docks which they painted in different left over colors to overcome the monotonous grey look of the region . This way of patchwork painting of the little wooden and metal houses in bright colors became the characteristic of La Boca. 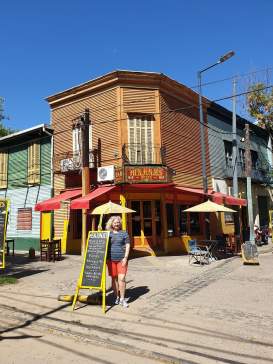 After the Italian community , also immigrants from Greece , Spain , France , England , Ireland and Eastern Europe arrived in this region.

Maradona, Eva Peron and Carlos Gardel are very important figures to both Argentina and the barrio of La Boca, so they put statues of them together, saluting the people. 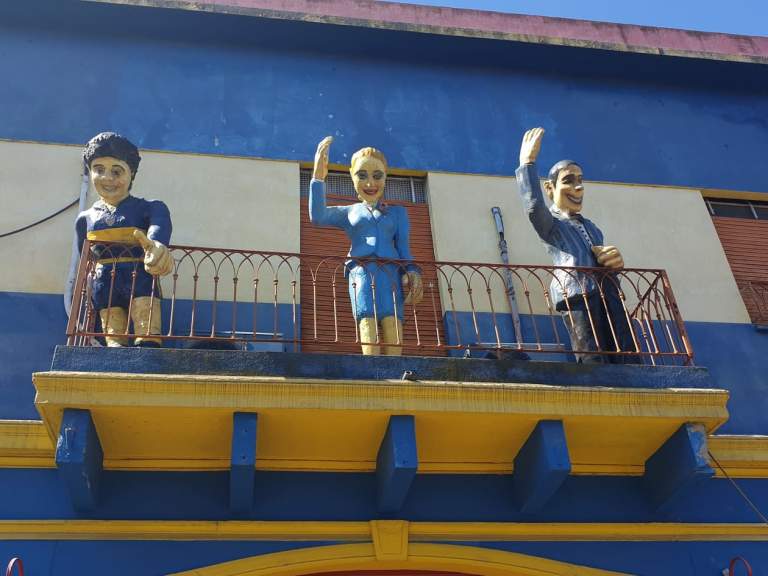 Another characteristic of this part of the city was the Tango as it has its origin here. Since there were very few women only in those days , the workers of the port and the factories around gathered at this place to dance man to man and to attract the few women’s attention. 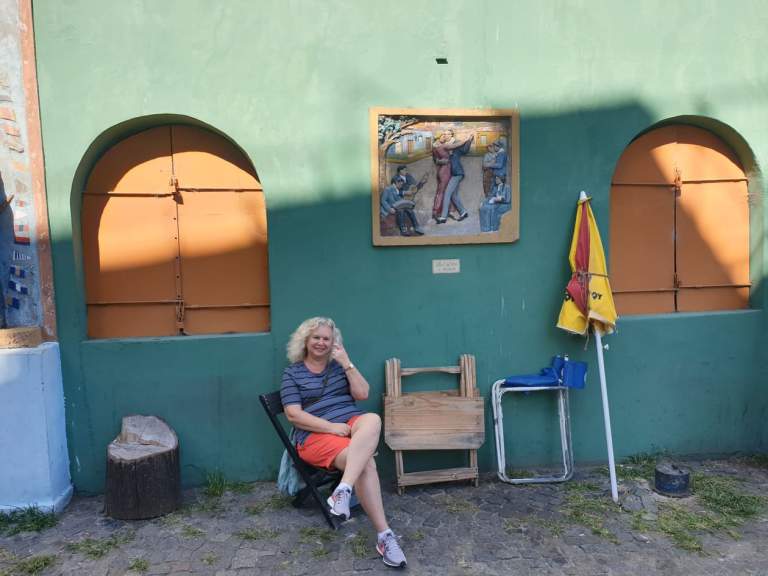 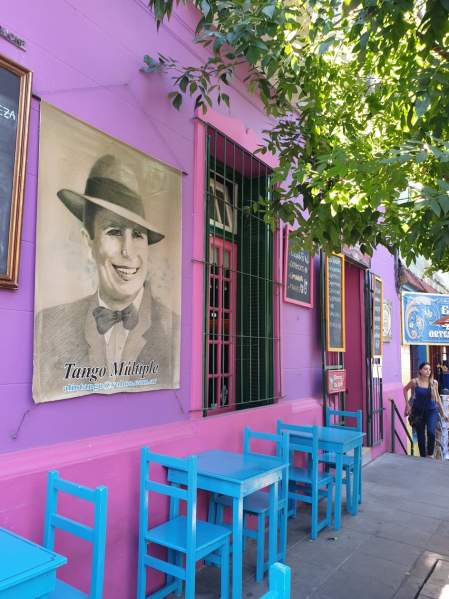 Now, you can have dinner or lunch in a restaurant in La Boca and watch a tango show along with live music.

After the construction of the new port of Puerto Madero, La Boca lost its importance and began to decline as a port. The comeback of La Boca was then later in the 1950s.

Quinquela Martin , who was an orphan, spent his major childhood in La Boca and studied drawings.

When the General Railway was closed down in La Boca in 1954 Quinquela gathered the people from the neighborhood and they were altogether painting the houses in bright colors to give it a certain artistic face and make it vivid again like in the times of the first immigrants to save the region.

La Boca became very popular and artists began using the houses for some theatre and other artistic purposes and the district became an artists’ colony.

In 1959 the area was declared an open air museum by the local government and Quinquela meanwhile became one of the most well known Argentinian painters and artists.

Today La Boca is a nice , colorful , heartfelt spot ,especially for tourists , to stroll around and to watch the tango dancers performing in front of the restaurants and houses and listen to the tango music .

The El Caminito is also a part of La Boca which means the “little walkway” or “little path” which is facing the colored wooden houses in La Boca and named after the famous tango ” Caminito “.

Originally the El Caminito was the route of an old stream that was flowing into the Riachuelo river. It dried up and became part of the railway road which was later also closed down. To walk under the sun in mid of these bright housings is fun but only for daytime. 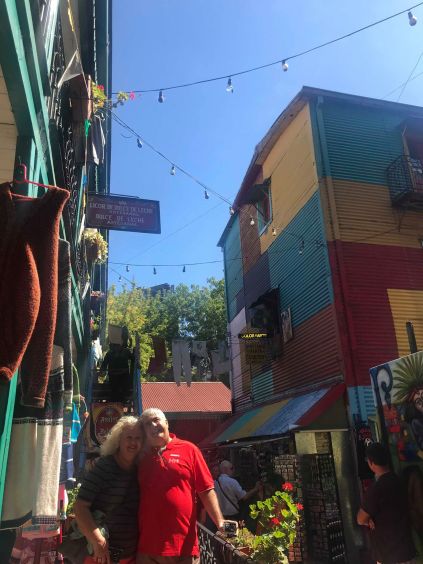 Due to safety reasons you better should not stay in La Boca or in the environment in the evening or at nighttime, unfortunately it is said to be one of the most dangerous districts in BA. So it is really important to be utmost careful and not to have any valuables with you and to listen to the advise of the locals or your guide. Better you do not walk by yourself in the streets, don’t leave the main path and better you do not wear a t-shirt of the River Plate soccer over here since the locals might not like it :).

For sure La Boca is a very touristic place but interesting to see when you know also about its historical background.

After leaving La Boca we move to Palermo where you can walk around in the streets , have some great meal in the street restaurants and cafes and got into the nice shops and great boutiques. 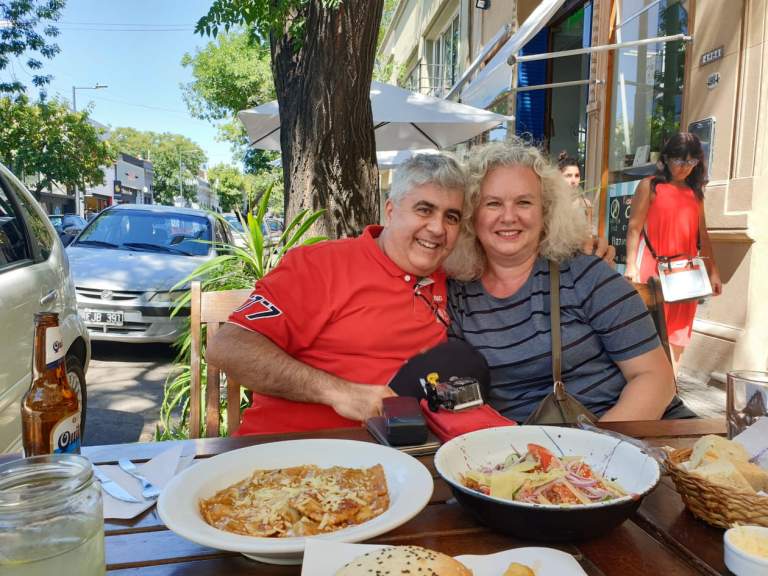