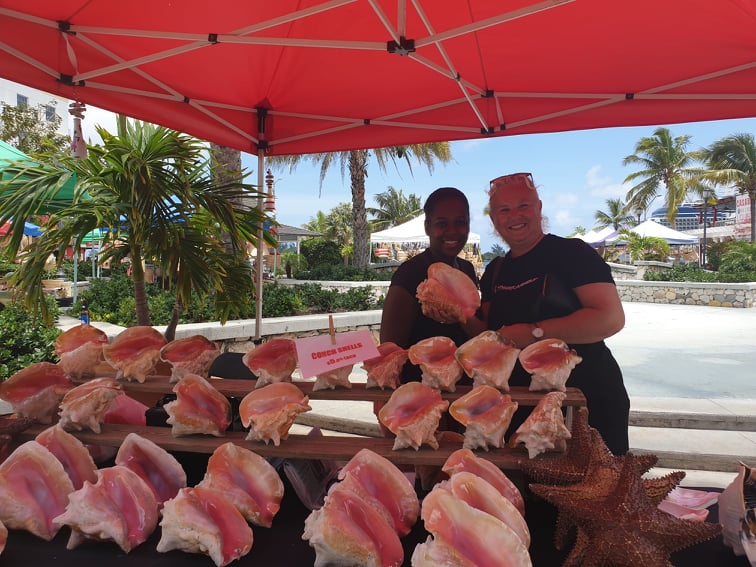 The Bahama Islands are a chain of 700 islands and 2400 cays , located in the north of Cuba in the Atlantic Ocean, at the gateway of the Gulf of Mexico, the Carribean Sea and Middle America  and was a former British Colony which covers an area of about 1400 square km. 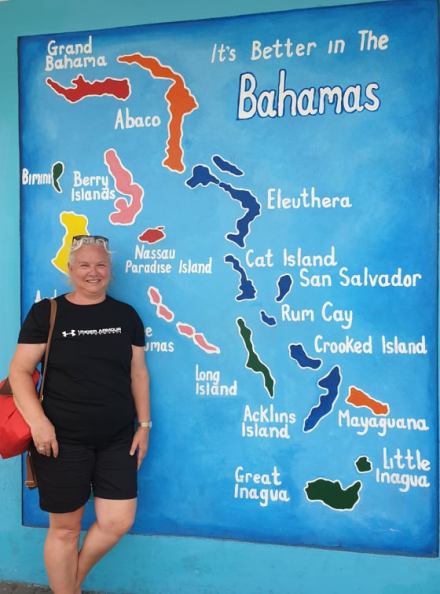 One end of this island chain is Grand Bahama Island , 100 km from the south coast of the US , from Florida , and at the other end is Grand Inagua Island approx 80 km from the Cuban coastline.

The Bahama Islands are worldwide famous for their great white and pink sandy beaches, their crystal clear blue waters and gorgeous reefs.

The most famous one is Exuma Beach with the worldwide known pigs on the islands.

Seagrass meadows , mangroves and coral reefs have their home in the Bahama Islands but as in most parts of the world they are endangered due to human activities and climate change.

Most of the Bahama Islands are uninhabited but the ones which are inhabited are settled mostly with people of African origin. In the history of the islands Christoph Colomb is passing by these islands before he arrives on the American Continent and with this event the European colonisation of the islands and South America starts .

As a result the Bahama Islands became a crown colony for 256 years of the British Empire and the colonisation left its traces behind. 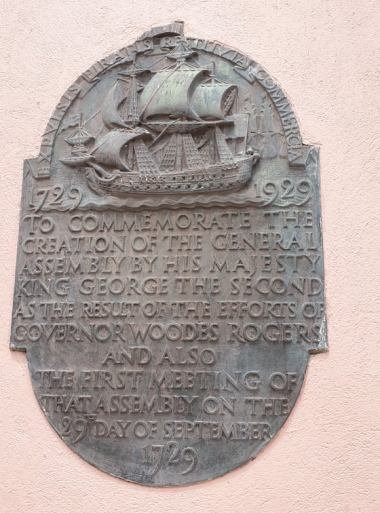 With the influence of the European Colonization the Bahamas became a place for African slave trade . As it was on other islands around , slaves were also selected here to work especially on the plantations in the south regions of North America.

We arrive in Nassau , the capital of the Bahama Islands after we have cruised in Puerto Rico and in the Virgin Islands , in St Thomas and St Martin Island .

I never thought that I will be any time in this corner of the world and I feel more then lucky. In this region you have the feeling that the horizon and the sea is really  endless. 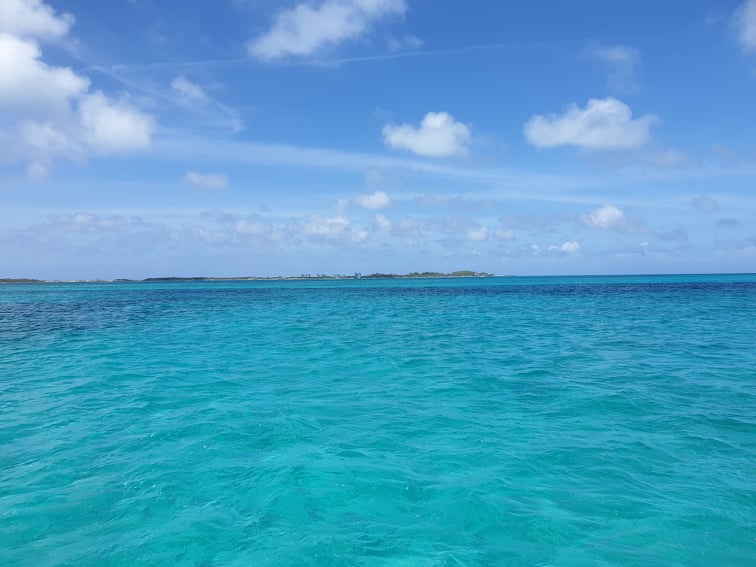 First we leave the port to do some kind of shore excursion at the downtown of Nassau  and stroll around in the streets of the little city. Weather is fine. 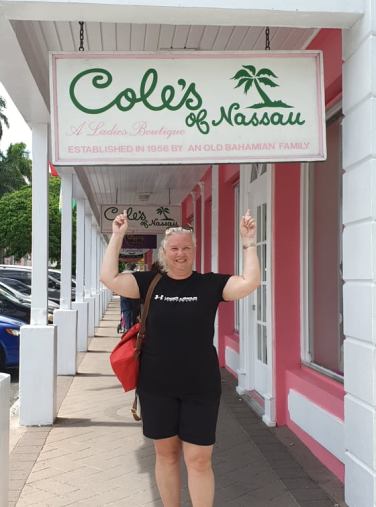 We walk through the streets , along the little parliament building with a marble statue of Queen Victoria in the front.

Here on parliament square all goverment buildings are in pink color , the House of Assembly , the Senate and the Supreme Court – all built in the late 1700s. This is the smallest parliament in the world with 38 members in the House of Assembly  and 16 members in the Senate.It is said that the judges and lawyers are still dressing up with the British wigs and robes due to the traditions in the historical past .

We walk along the pink , white , blue coloured houses in colonial style and the Christ Anglican Church cathedral. 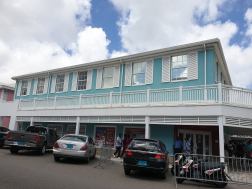 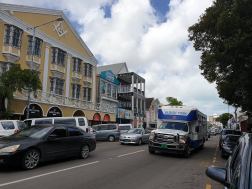 While you walk around you see the colorful houses in this seaside town. 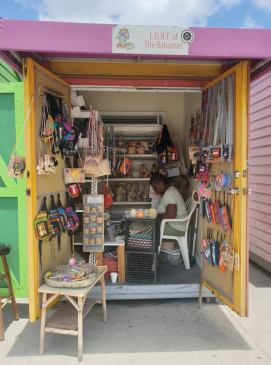 A little further we arrive at the British Colonial Hotel which was built in 1901.

We pass by the huge traditional straw market which is growing here since the 1940s. The straw market is a real place for Bahamaian goods, food , straw gifts , wood carvings, hand woven hats , bags , mats and conch shell jewelry .

At the corner of Bay street is the Pompey Museum of Slavery and Emancipation.It is a witness of the dark history of mankind. 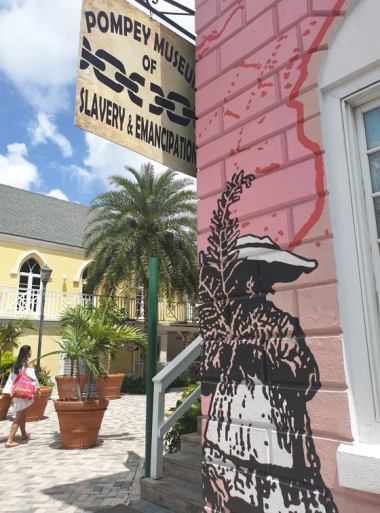 It is the so-called Vendue House which was a kind of marketplace for African slaves from 1769 until the late 1800 s . Africans who were transported to this place from the African continent and who did not die during this long journey were sold in this building as slaves .Later in 1992 the Vendue House became a Museum named after Pompey , a brave slave who was working on the plantations on Bahama Islands. It is shaking up one’s soul when you pass by such building and think of the past.

Behind the Vendue house is the festival market where locals try to sell their goods to the visitors.The people are very friendly .Some local music is playing in the background .It is nice to talk to the local people in the market and finally I cant resist and  buy a beautiful pink conch shell  .These are objects at my home that remind me about the awesome moments we are allowed to live and that make me fee so grateful about life. I hold the conchy shell to my ears and can listen to the ocean’s sound and enjoy. 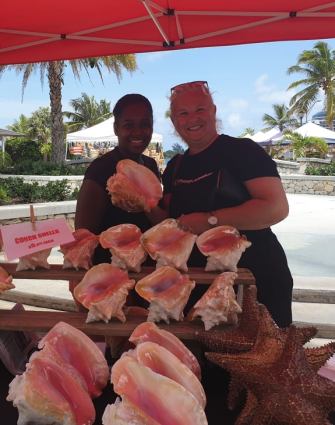 But our real goal is to go for some swimming and diving on the islands of course and this is why we leave the port in the early afternoon. We take our boat and pass by the beautiful villas with their motorjachts in front . They have huge gardens with palm trees in front . The view from the houses onto the water should be gorgeous .

We have our equipments with us and will go for a swim at Pearl Island. 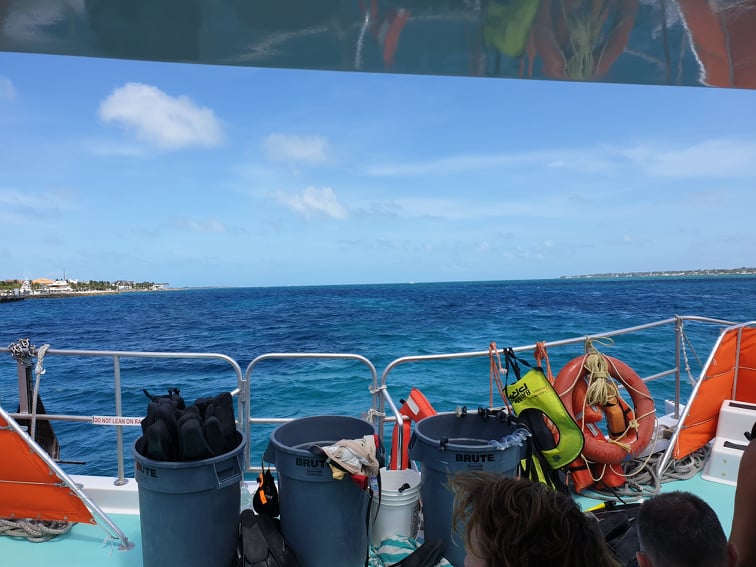 The water has different shades of blue , the waves are soft – the nicest is the light turqoise color.

People are on sea with their white sailing boats or motoryachts around .There is some nice wind .

Finally we arrive at Pearl Island . The water is wonderful clear .

One of our friends on the boat sees a little shark at the left side of the boat and springs into the water , but the shark escapes in the ocean .

Under our boat is a nice reef and so many different types of fish and also some corals which are great to explore .

We jump into the water , there is some strong current and I am surprised that the water is not that warm but endurable.

We dive into the sea and watch out for the different fish and coral species in the deep. 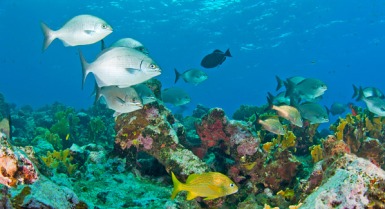 My favourite this time is the lilac fan coral which is waving in the current of the water . I have seen some reefs in the world – I have been in Australia at the Great Barrier Reef , in Mauritius , in Egypt and others but I think it is the first time that I realize such a lilac fan reef . What wonders of the world – really beautiful.

Under the water you feel so free and happy – you can really breathe new energy over there.

Do you know the feeling of being breathless ?

The feeling that you definitely need to leave and take a break ?

Then it is sometimes time to get out and you feel better the more far you are away from everything.

So far that actually there is nearly nothing around then the wide and simple deep blue…the endless sea and sky where you are free like a bird or a fish .

Where the wind and the sun around your nose tells you that this is the real life , outside there, in nature…different to the world of your computers, telephone calls , conferences, tough business relationships ,business flights and floods of emails – a world where you can take a breathe …

Yes, a world that is calm,deep,meaningful and fair….a world where you can even take a breathe under the sea and free your mind and soul !

As usual, life under water is so impressive , so gorgeous … we swim there the whole afternoon but we cannot get enough. Unfortunately we need to leave after some hours as we need to leave Nassau in the evening.

There is no more time but one thing is clear : we defintely need to come back one day to drive around in all the islands in detail and watch out for all the nice beaches and bays and to catch every opportunity to dive into the waters over here.